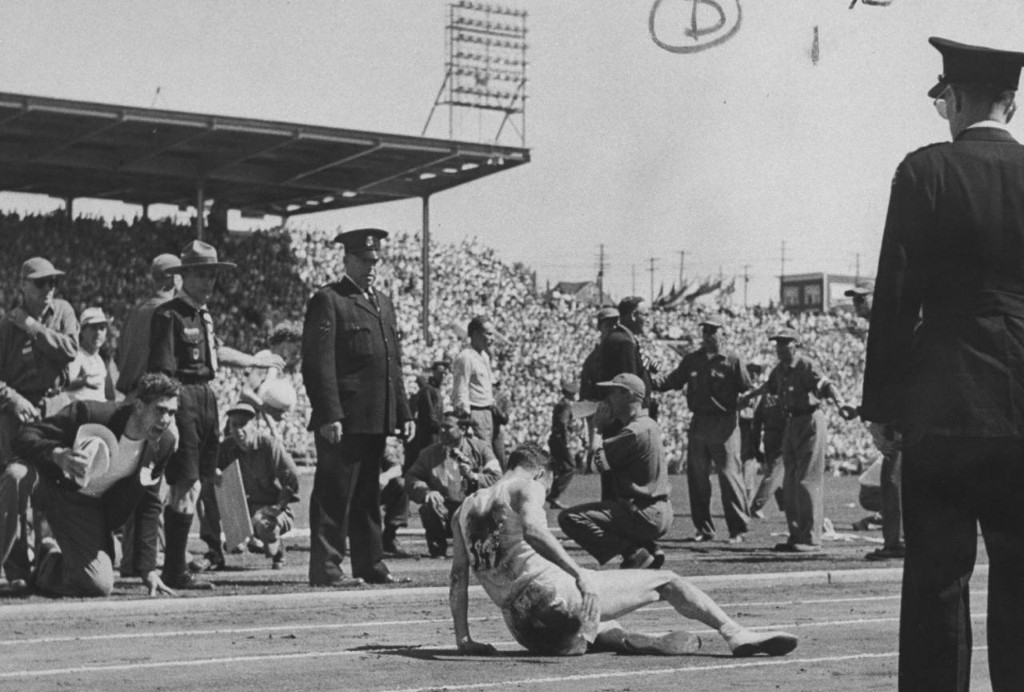 Even now, more than 60 years after it happened, the grainy black-and-white newsreel footage is still painful to watch.

Jim Peters, a 35-year-old Englishman who had lowered his own marathon world record to 2 hours 17 min 39.4sec just five weeks earlier, is wobbling on spindly legs down the Empire Stadium track during the 1954 Empire Games in Vancouver.

After running 26 miles on the road under a blazingly hot mid-day sun in temperatures that reached as high as 28 degrees, he is weaving back and forth across the track, stumbling like a drunk in a groggy search for the finish tape and the victory.

It is 45 minutes after a capacity crowd of 35,000 has been enthralled by the "Miracle Mile", the legendary race between Roger Bannister and John Landy.

And now, suddenly, the fans are transfixed by this heroic/tragic figure whose face is turning as ghostly greyish-white in his sweat-soaked singlet, ridiculously baggy shorts and Woolworth’s plimsoles.

High in the pressbox, the great Peter Wilson of the Daily Mirror fed another sheet into his typewriter: "Two steps forward, three to the side. So help me, he is running backwards now...oh, he's down again...The nauseous spectacle of a semi-conscious man being allowed to destroy himself while no one had the power or gumption to intervene."

Some in the crowd had begun shouting for officials to put a stop to the sad sight. At one point, the announcer called for order and "a respect for sportsmanship".

Peters, who entered the Stadium 17 minutes ahead of his closest pursuer, eventually sprawls over what some English officials thought to be the finish line, where he is caught by the team’s masseur and laid on a stretcher. The "grotesque" dance has gone on for 11 minutes.

"And then they announce that the real finish line is on the other side of the track, 220 yards away, and so Jim Peters has lost anyway," Wilson wrote.

"What does he remind you of, as, head lolling and a collar of foam streaming from one corner of his twisted mouth, a landed fish with a gaffed jaw heaving for water and dying in the sun, a trapped and bloody fox which has gnawed its own leg off for freedom, a rabbit with infected myxomatosis beating its own brains out?"

Several myths have grown up around the race, including a claim by English officials at the time that the course was too long by as much as three-quarters-of-a-mile than the official distance of 26 miles 385 yards. Alex Frew, who had been in charge of measuring the marathon course for the Games, later claimed that "two or three months of laborious preparation" went into ensuring the length of the course was accurate.

Before the start of the race, Peters had tossed away the baseball cap he had bought that morning to help beat the heat. He had never used a cap before and found it uncomfortable. "With that cap, I would have, without a doubt, finished the race," he said years later.

Incredibly, Peters drank no water during the race. He liked to cool himself with sponges, but the first two he took at the feed stations were dry.

Despite the sweltering conditions, he set off on a fast 2:20 pace, with only team-mate Stan Cox and Scotland's Joe McGhee able to stay with him. McGhee dropped back at nine miles. As Peters neared the Stadium, he believed Cox was still close behind. But Cox, suffering from heatstroke, had run into a telegraph pole at 24 miles.

There were reports that English officials who could have informed him of his big lead had abandoned their positions to go into the Stadium to watch the Bannister-Landy race.

Peters was unconscious for some three hours after the race and it was reported that he was near death in the hospital, where he was attended to by, among others, a newly certified Dr. Roger Bannister. It was several days before he was well enough to be released.

Forty years on, in 1994, then a spruce, white-haired 75-year-old told The Guardian: "I was lucky not to have died that day."

He said that he had often suffered since from giddiness and what he called "my Vancouver headache".

"I set off too fast in the heat, but that was always my way: to destroy the field... If someone had told me I was so far ahead, I dare say I'd have eased off a bit... When I woke up in hospital I thought I'd won. When I asked a nurse, she'd said, 'You did great, Jim, just great'. So at least I went back to sleep a winner, didn't I?

Peters said that when he initially wobbled coming down the ramp into the Stadium, his first thought was that he didn’t want to disgrace his wife and family. He did not understand what was happening to him - "My legs just gave way. It was like I was trying to run on quicksand" - but he drove himself, falling and rising until collapsing into the arms of the masseur.

Only six runners finished the gruelling challenge, including the winner McGhee, who crossed the line in 2:39:36. McGhee’s own modest ambition for the race had been simply to last the distance in the heat, and he revealed years later that friends and ­colleagues had worked wonders to keep him supplied with water and encouragement throughout the race.

Learning of events up ahead from them, McGhee had thought for some time in the race that he was destined to be second, and had continued to run conservatively, but as he entered the Stadium, Scottish team captain Dr Euan Douglas gesticulated wildly that he was going to win, and McGhee duly became the youngest-ever Commonwealth Games marathon gold medallist, though it is Peters’s collapse that is always associated with the race.

Another myth from that race claimed that McGhee was on the verge of dropping out himself before he was told that Peters had collapsed and could win. "They seem to have originated in the romantic fantasy of a local reporter who described how I was lying in a ditch until an old Scots lady revived me with the exhortation that the honour of Scotland was at stake," he told Scotland on Sunday in 1994.

"My lasting grief is that all the headlines for my idiocy denied just deserts for the actual gold medal winner - but at least I'd beaten him to the Stadium entrance by a whole 17 minutes, so the Duke of Edinburgh struck me a special medal, inscribed 'J Peters, a most gallant marathon runner'. It's the most treasured of all my trophies," Peters told The Guardian.

In 1967, Peters returned to Vancouver and during half-time of a local Canadian football match ran the final 220 yards of his race.

Peters passed away in 1999 at age 80 after a six-year battle with cancer.