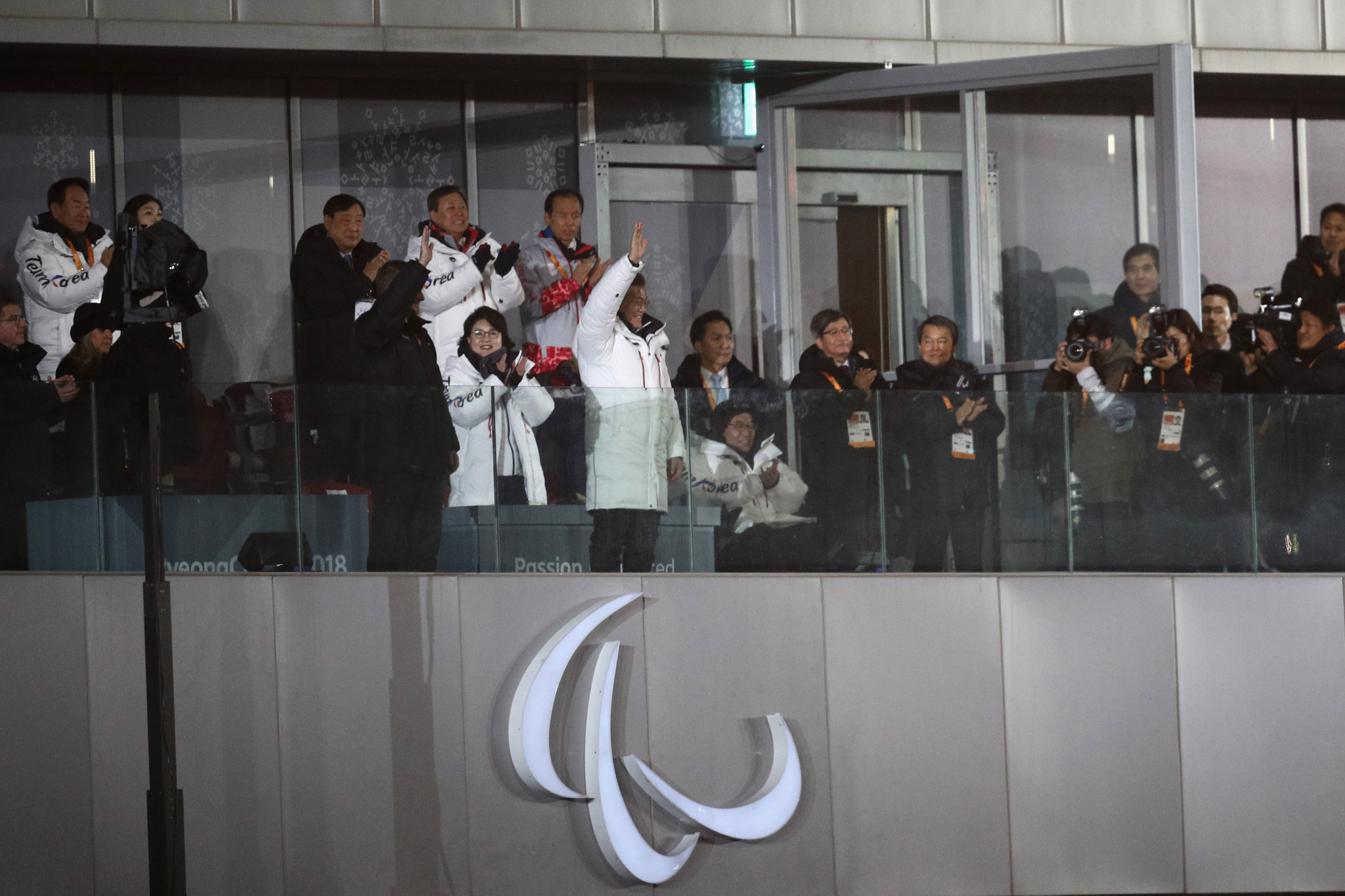 Moon watched his country’s delegation march separately from North Korea’s following a dispute yesterday over the unification flag to be carried.

North Korea said that it wanted the flag to show Dokdo, the island grouping at the centre of a diplomatic dispute between South Korea and Japan, while South Korea apparently wanted to have the unification flag without it so as not to politicise the event.

Ultimately, the International Paralympic Committee (IPC) decided that it did not want any further debate on the matter and suggested the two Koreas march separately at the Opening Ceremony.

Moon was invited to do the official declaration by IPC President Andrew Parsons, who followed Pyeongchang 2018 counterpart Lee Hee-beom in delivering a speech.

"The journey of an athlete starts with a dream; the dream of competing in sport; of representing your country; of winning a medal and writing your name into history," Parsons said.

"From tomorrow, Paralympic athletes will turn their dreams into reality.

"They will perform feats that some might not even dare to dream about.

"Speed, skill, strength, endurance and intelligence; tremendous abilities that will at first surprise you, but ultimately will inspire and excite you.

"Once, a wise man said, 'A dream you dream alone is only a dream.

"'A dream you dream together is a reality'.

"For nearly 20 years this country has dreamt of staging its first Paralympic Winter Games.

"President Lee and members of the Pyeongchang 2018 Organising Committee, because of you, we are now living that dream."

In his speech, Lee spoke of his high hopes and expectations for the Games.

"Having recognised how much you, Para-athletes, have sweated and shed tears coming all the way to Pyeongchang, we all know that everyone of you is already 'champion as well as hero'," he said.

"It is my ardent wish that Pyeongchang 2018 will be truly blessed with you in a Paralympic spirit of courage, determination, inspiration, and equality.

"The Pyeongchang 2018 Paralympic Games are participated by the biggest-ever number of delegations, and the Games are known as the greatest global Paralympic Winter Festival.

"At the same time, it is my sincere hope and expectations that Pyeongchang 2018 Paralympic Games will serve the purpose of a cornerstone to create a caring-and-sharing society without discrimination and prejudice well beyond the values of peace and harmony, inspiration and jubilation.

"In addition, the festival of Pyeongchang 2018 will shed 'Light of Hope' on the future of all people across the world, yearning for peace beyond the Korean peninsula and Northeast Asia.

"In particular, my warm welcome is for Georgia, Tajikistan and DPR Korea who took their great first step in this Paralympic Games.

"Finally, may I take this opportunity to ask you, Para-athletes, to fully demonstrate your performances in the competitions, and to enjoy the beauty of Pyeongchang during your stay."

The Opening Ceremony begun with an artistic segment entitled Let’s Move, which saw Myeongjin Shin, an amputee performer with a prosthetic arm and legs, beat on a giant drum.

It was followed by the playing of the South Korean national anthem and hoisting of the country's flag before the traditional Parade of Nations was held.

A second artistic segment, entitled Possible Dreams, then took centre stage and was based around Sojeong, a girl with a visual impairment.

Pyeongchang 2018 Paralympic mascot Bandabi glided on a snowboard and handed over a pair of warm earmuffs to Sojeong.

Upon putting on the earmuffs, the white land of Pyeongchang unfolded in front of her and children ran out to play in the snow.

Following the speeches by Lee and Parsons, and Moon’s opening declaration, the Paralympic flag was hoisted and the oaths of athletes, officials and coaches were given.

The penultimate artistic segment, entitled Passion Moves Us, saw the "wheel of passion" roll onto the centre of the stage.

The wheel was engulfed by four petals that represented courage, determination, inspiration and equality.

Rounding out the Opening Ceremony was the lighting of the Paralympic Cauldron, which was preceded by the final Torch Relay.

Nordic skiers from the two Koreas - the South's Choi Bogue and the North's Ma Yu Chol - carried the Torch together into the stadium and it eventually ended up in the hands of Han Min Su, a South Korean sledge hockey player with a prosthetic leg.

Together, Kim and Seo lit the Cauldron and the Paralympic flame rose to signal the grand finale.

Nine days of sports competition at the Winter Paralympics are scheduled to begin tomorrow.