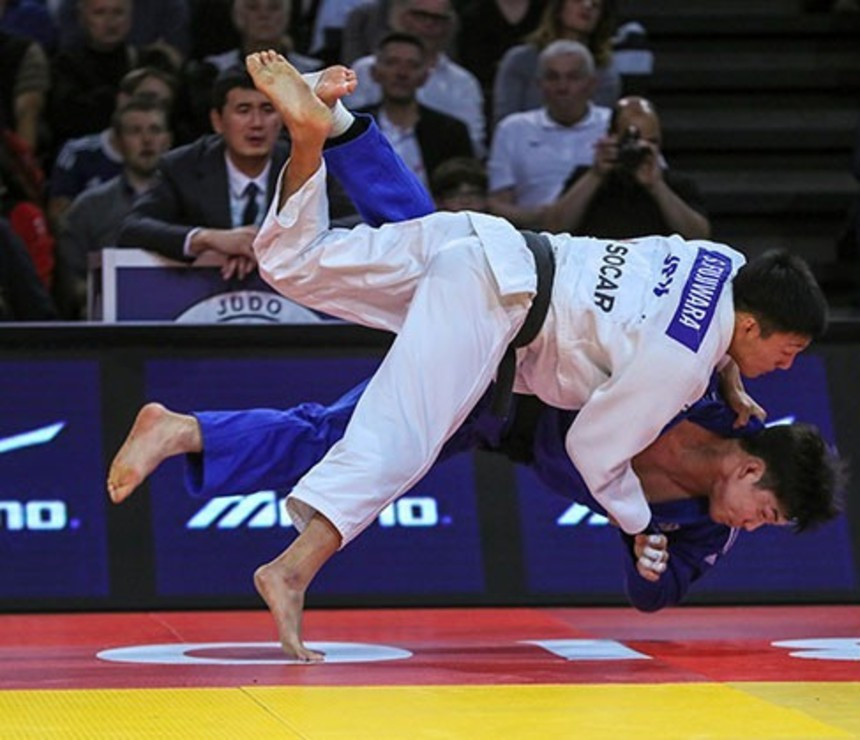 Young judokas Fujiwara Sotaro and Mukai Shoichiro earned their first Grand Slam titles as Japan’s men won three of the four golds up for grabs on the final day of the Paris Grand Slam at the AccorHotels Arena.

While Japanese hopes took a tumble in the women’s under 70 kilogram final, where Britain’s Sally Conway inflicted a historic defeat on world champion Chizuru Arai, the display in the men’s concluding finals was almost faultless as Kokoro Kaguera rounded off the competition with his first Grand Slam victory in the over 100kg class.

The young Japanese initially put his hands to his face in disbelief, before rushing over to assist the injured Gviniashvili off the tatami towards his coach - a gesture the huge crowd recognised with a standing ovation.

It was the second time Mukai had had to usher a beaten and injured opponent from the field of battle - South Korea’s Gwak Donghan suffered concussion in their semi-final and was unable to fight for the first bronze against Edward Trippel of Germany.

The 19-year-old Fujiwara won his first major honour on the World Judo Tour in only his second Grand Slam performance, overcoming South Korea’s Lee Seungsu in the under 81kg final.

Frank De Wit of The Netherlands won the first bronze medal match against Jaromír  Musil of the Czech Republic, while the other bronze went to Georgia’s Nugzari Tatalashvili, who beat Antoine Valois-Fortier of Canada.

Kaguera defeated Kim Sungmin of South Korea with a ko-uhi-gari for ippon in the concluding over 100kg final, bringing Japan’s total of gold medals over the weekend to five.

Kim had reached the final at the expense of the Czech Republic’s under 100kg 2016 Olympic champion Lukáš Krpálek, who took bronze with victory over Roy Meyer of The Netherlands.

Georgia’s Guram Tushishvili, disqualified in his semi-final against Kaguera for making contact with the face of his opponent with his knee, was ineligible to contest the second bronze medal with Aliaksandr Vakhaviak of Belarus.

Conway’s defeat of Arai meant she became the first British woman to win gold at the Paris Grand Slam since 1997.

The Rio 2016 bronze medallist, beaten by the defending Paris champion in their two previous meetings, won the contest with a late counter-attack.

She thus became only the sixth British fighter to win the Paris tournament, the first since Craig Fallon in 2003 and the first British women since Kate Howey in 1997.

Conway was also the first British judoka reaching a Paris final since 2004, when Sarah Clark won the silver medal.

"I don’t think it’s even really sunk in yet," said Conway.

"I’ve just come off the podium and listened to the national anthem in this amazing Bercy Stadium and it was just the best feeling ever."

In the final minute Arai went for a big attack which Conway defended well.

The Briton continued to move though and rolled Arai to ground and secured the hold down, ending the contest with 20 seconds to go.

The other bronze went to Kim Polling, also of The Netherlands, who defeated African Championships winner Assmaa Niang of Morocco.

World number one Michael Korrel of The Netherlands was the only non-Japanese judoka to win a men’s gold medal on the second day, having a walk-over in his under 100kg final as South Korea’s Cho Guham had a knee injury.

France’s double Olympic medallist Audrey Tcheumeo had the Arena in uproar as she won her country’s second gold medal at this flagship event, defeating The Netherlands' world number Guusje Steenhuis in the under 78kg final before dancing her way off the tatami.

There was bronze medals too here for the home nation, as Madeleine Malonga won her match, with the other bronze going to Japan’s Hamada Shori.

South Korea’s world number one Kim Minjeong made no mistake in the over 78kg category, earning the title with victory over China’s Wang Yan.

The bonze medals went to Sone Akira of Japan and Azerbaijan’s Iryna Kindzerska.