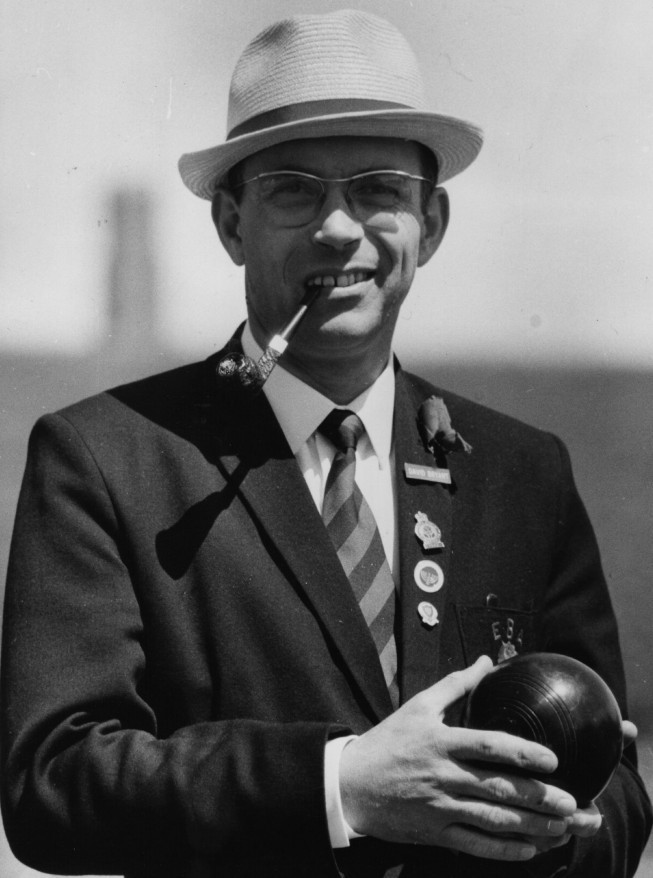 Englishman David Bryant looked like everyone's favourite uncle rather than the ruthless assassin he was when he stepped onto the bowls lawn.

His international career did not properly begin until he was 31 when he won two gold medals in the singles and fours at the 1962 Commonwealth Games in Perth.

Bryant then won the singles again at Edinburgh 1970 and Christchurch 1974 before winning a fourth consecutive gold medal at Edmonton 1978, bringing his total of Commonwealth Games gold medals to five.

The only reason he did not win five singles titles was because bowls was not included on the Commonwealth Games programme at Kingston in 1966.

Part of Bryant's enduring popularity and the reason he still sticks in so many people's minds is because he usually had a pipe in his mouth when he competed.

Even to members of the public who knew nothing about Drake's ancient game, the Somerset schoolmaster was known as "the man with the pipe".

Puffing endlessly on that ever-present pipe, it was Bryant who did most to bring bowls out of the woods and into a nation's front rooms.

Mind you, the pipe was rarely lit during actual competition, and never on the indoor greens, where the carpet would have been ruined by the constant dropping of ash.

Bryant was nothing if not a considerate man.

After winning his 1978 Commonwealth title, The Guardian's Frank Keating congratulated the then 46-year-old Bryant by "jokingly suggesting his victory was another nice encouragement to the old and ageing".

"He remained polite, of course, but he tapped out his pipe on his heel sharply enough to convey that he was momentarily miffed," wrote Keating.

Bryant had almost as many nicknames as he did titles.

The most common that people used were "David the Goliath" and the "Don Bradman of bowls".

Bryant studied bowls so extensively it was once said he could have lectured on the subject at degree level but it was his sportsmanship that made an impression on many of his rivals.

Never afraid to applaud a good bowl by an opponent, some players found it intimidating - almost gamesmanship, especially when he often bettered it with his very next shot.

Bryant may have taken his time to reach international level but he won his first title when he was 16, the Clevedon Club Handicap in 1948.

Once he collected those two Commonwealth Games gold medals at Perth 1962, he did not stop for another 30 years.

Bryant's last major achievement was a silver medal in the pairs at the 1995 World Indoor Championships when he was 63.

Now 86, he still plays the occasional club match and remains a revered figure within the sport in Britain.

Bryant played in a golden era for the sport, enjoying a great rivalry with Scotland's Willie Wood, the man who succeeded him as Commonwealth Games champion when he won the singles title at Brisbane in 1982.

There were more tournaments on television in the 1980s and early 1990s than there is now and there was more money in the game.

Bryant and Wood shared the same agent and enjoyed lucrative sponsorship deals, mainly because of the exposure they enjoyed thanks to the Commonwealth Games.