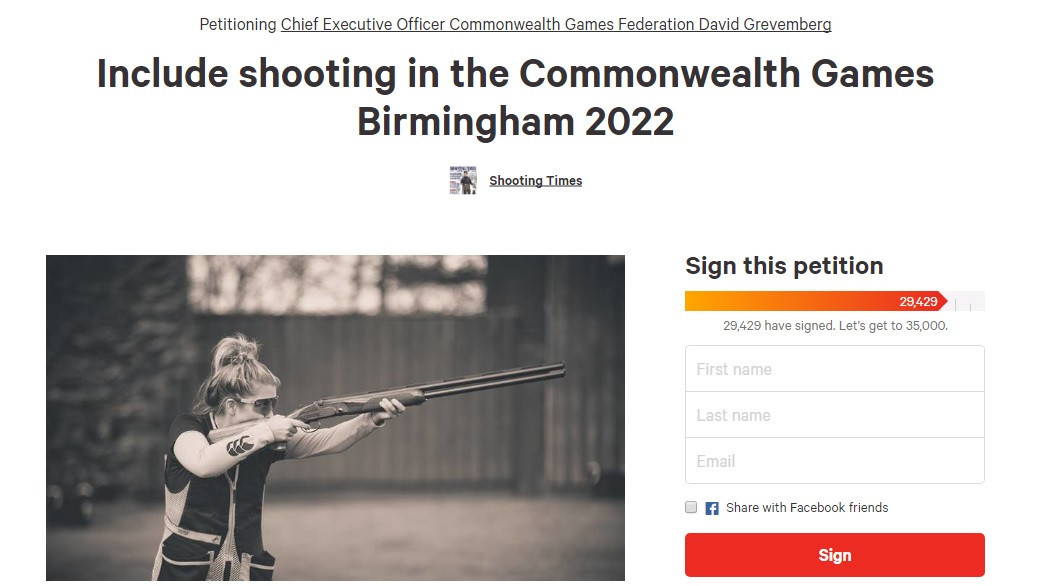 Commonwealth Games Federation (CGF) chief executive David Grevemberg has defended the omission of shooting from the Birmingham 2022 programme after an online petition was set up in an effort to get the sport reinstated.

The petition, launched on the Change.org website by British specialist publication the Shooting Times, has attracted nearly 30,000 signatures since it was published earlier this week.

It calls on the CGF and Birmingham 2022 to "reconsider" their decision not to include shooting on the programme.

Ian Ward, who led the successful bid and is the current head of the Birmingham City Council, revealed shooting would not be part of the Games when the city was officially awarded the event last month.

The lack of a suitable venue was given as one of the main reasons.

The petition, however, points out that the nearest Olympic-standard shooting range to the city is 130 miles away in Bisley in Surrey.

This is five miles closer to Birmingham than London's Velodrome on the Queen Elizabeth Olympic Park, which Ward confirmed would host track cycling at Birmingham 2022, according to the petition.

In an open letter, published in response to the petition, Grevemberg appears to suggest the decision is final after the International Shooting Sport Federation (ISSF) claimed they would continue to lobby the CGF and Birmingham 2022.

The CGF chief executive also revealed President Louise Martin would hold talks with the ISSF "to discuss their future plans and ambitions to continue the development of shooting disciplines throughout the Commonwealth".

"Shooting is a thrilling sport with a proud and longstanding heritage at the Commonwealth Games," Grevemberg wrote.

"We understand that there will be disappointment when an optional sport is not chosen, and especially so when a particular country has enjoyed medal success in this sport historically.

"Nevertheless, we believe it is fundamentally important for the Games Partners; namely Commonwealth Games England, UK Government, Birmingham City Council and the West Midlands Combined Authority - and indeed for any other host city - to propose a sports programme that complies with our agreed rules but also works best for them.

"Birmingham is a diverse and dynamic city that has proposed an inspiring and inclusive event for 2022, and in record time.

"We know they considered all optional sports carefully, but a final decision was reached.

"The CGF has awarded the Games supporting these plans and consequently shooting will not feature at the 2022 Commonwealth Games."

Shooting, which has been contested at every Commonwealth Games since Kingston 1966, with the exception of Edinburgh 1970, currently features on the CGF's list of optional sports from which a Games host city can include up to seven.

Another sport on the list is archery, whose governing body have also embarked on a campaign to get the sport included on the Birmingham 2022 programme.

World Archery have established a Commonwealth Working Group, led by Archery GB's Hilda Gibson, as part of their reinstatement effort.

Archery has not featured at the Games since New Delhi hosted the 2010 edition.

It was omitted from the 2014 Games in Glasgow and will not be on the programme at this year's event in Gold Coast.

According to Indian newspaper The Tribune, World Archery secretary general Tom Dielen has already met with representatives from Birmingham 2022 to discuss the issue.

"We are excited to be in dialogue with Birmingham City Council about the inclusion of Archery on the 2022 sport programme," Gibson told insidethegames.

"We have recently put in place a three-year agreement for the Archery GB National Series Final to be held in Birmingham City Centre and, as a highly inclusive sport, we’re ambitious to help Birmingham put on a great Games reflecting the diversity of Birmingham and the Commonwealth."