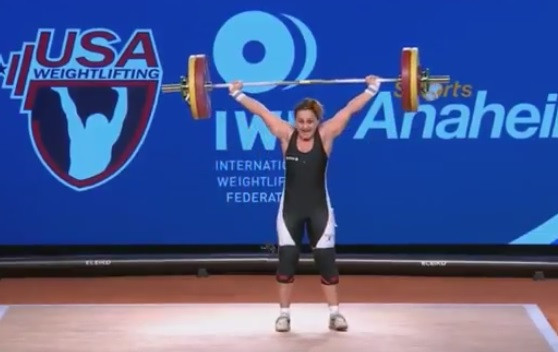 An Albanian weightlifter who became her nation’s first female World Championships gold medallist in any sport in 2014, and won gold again last December, has tested positive for a second time.

Romela Begaj, a 31-year-old who is married to and coached by a former boxer, is the only athlete to date to have tested positive at the 2017 International Weightlifting Federation (IWF) World Championships held in Anaheim in California last month.

If her positive, for stanozolol, is confirmed when her B-sample is tested Begaj would be stripped of gold for a second time and disqualified.

A second ban, probably for eight years, would end her career.

Mattie Rogers, the popular American, is in line to move up from third place to second in the 69 kilogram class, in which Begaj won snatch gold and silver on total.

Rogers told her half-a-million followers on social media, "Nothing is official as of now, but the usual doping measures are being taken with this case. Nothing will be set in stone until appeals are settled and the B sample is tested."

Begaj, a snatch specialist, posted a total of 235kg in Anaheim, the same as Rogers and four kilograms behind the Colombian winner Leidy Solis.

Nothing is official as of now, but the usual doping measures are being taken with this case. Nothing will be set in stone until appeals are settled & B sample is tested. https://t.co/P7gsatPgfK

In 2014 Begaj, a former circus performer, won the gold medal in the 63kg snatch – not only a first gold for an Albanian woman in weightlifting, but a first in any World Championships in any sport by an Albanian female.

She was disqualified and banned for two years after testing positive for stanozolol at those Championships in Almaty in Kazakhstan - as was another Albanian champion, Daniel Godelli.

After her gold medal presentation in Almaty, and before news of the positives broke, Begaj had told insidethegames, "Everybody is talking about weightlifting back in Albania - it's the number one sport right now.

"It's live on television and in all the newspapers."

It was is big talking point on television and in the newspapers again after Albanian television broke the news of Begaj’s "doping scandal".

Begaj’s husband, Gazmend Hackani, was quoted as saying that Begaj had not taken any banned substance "and the B-sample will prove it".

He told Report TV, "Romela is clean, this is a game of the International Federation to favour the American who came third.

"It is impossible to be twice positive with the same substance."

Albania is host nation for this year’s European Championships in March, at which Begaj would have been favourite for the 69kg title.

Begaj has won medals at the European Championships five times since 2008, though she has never won on total.

She competed at the Olympic Games twice, finishing fifth in Beijing in 2008, and ninth in London four years later, both at 58kg.

Begaj had carried Albania's flag at the Opening Ceremony of London 2012.

If Begaj’s B-sample is confirmed it will be Albania’s 10th doping positive since 2011 – two of them for Begaj and two for the 25-year-old Hysen Pulaku, who also tested positive for stanozolol twice and is serving an eight-year ban.