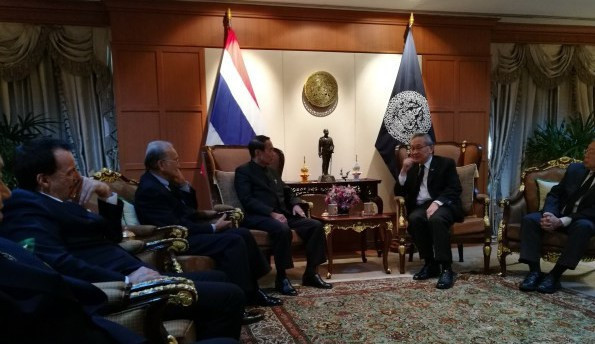 Meetings have taken place between the International Federation of Muaythai Amateur (IFMA) and Thailand's Ministry of Foreign Affairs to discuss a partnership in 2018 to showcase the sport.

Those present at the latest meeting included IFMA secretary general Stephan Fox as well as Miss Busadee Santipitaks, director general of the Department of Information and spokesperson of the Ministry of Foreign Affairs.

Representatives were also present from the Ministry of Tourism and Sport, the Boxing Board of Thailand and the Amateur Muaythai Association of Thailand under Royal Patronage.

A "close cooperation" will be realised between the two sides, it was announced afterwards.

This will include using the Royal Thai Consulates and Embassies around the world and also muaythai promotional tours jointly organised by the Ministry of Foreign Affairs and the IFMA.

It is hoped that a first such event will take place in a yet-to-be-determined location in the Americas in April or May before the IFMA World Championships in Cancun, Mexico.

The IFMA were provisionally recognised by the International Olympic Committee last year.

The body is based in Bangkok, with Thailand remaining the heartland for muay thai.

Fox also made a detailed presentation in his capacity as Global Association of International Sports Federations vice-president about April's SportsAccord Convention in the Thai capital.