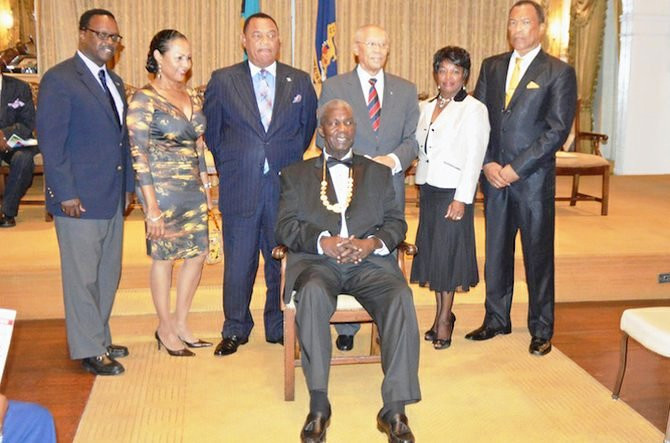 Tributes have been paid after Sir Arlington Butler, the longest-serving President of the Bahamas Olympic Committee (BOC), died at the age of 79.

He was honoured in 2014 for his years of service to sport and the Olympic Movement by receiving the Pierre de Coubertin Award from the International Olympic Committee, while he also became the inaugural recipient of the BOC President's Award.

Named after the founder of the modern Olympic Movement, the Pierre de Coubertin Award recognises those "who exemplify the spirit of sportsmanship in Olympic events or through exceptional service to the Olympic Movement".

Sir Arlington became the fourth President of the Bahamas Olympic Association, which later became the BOC, in 1973 and spent more than 35 years in the role.

During Sir Arlington's tenure the country won seven Olympic medals, all in athletics, including two golds at Sydney 2000 for Pauline Davis-Thompson in the women's 200 metres and the women's 4x100m relay.

This was followed by gold for Tonique Williams-Darling in the 400m at Athens 2004.

Sir Arlington also spent four years as President of The Bahamas Association of Athletic Associations from 1964 to 1968.

In a tribute, the Caribbean Association of National Olympic Committees (CANOC) expressed sympathy to Sir Arlington's family and the local sporting fraternity.

They acknowledged his involvement in the development of both the Pan American Sports Organization and the Association of National Olympic Committees, adding: "His contributions to General Assemblies and Executive Committees of these organisations were always particularly informative and manifestly articulated."

"Sir Arlington saw himself as a Caribbean man who always represented the region with distinction, importantly, he remained an outstanding Bahamian who never forgot his unflinching commitment to his country in everything he did," the statement added.

"His presence was simply remarkable."

Keith Joseph, the CANOC secretary, added: "We are all imbued with the same passion he brought to the Movement and are, therefore, ever emboldened to strive ahead with confidence in pursuit of a better world through Olympism."

Sir Arlington was the former speaker of the House of Assembly and a former Bahamas ambassador to the United States.

The Nassau Guardian said that he "was a statesman who was educated at the Bahamas Teachers College, the University of Nottingham and the Longborough Training College".

"He had a long and distinguished service in Government and politics," the newspaper added.

"Sir Arlington, who was a lawyer by profession and previously an educator, served as a minister in the Cabinet of Hubert Ingraham."

He was knighted in 1996 by Queen Elizabeth II.