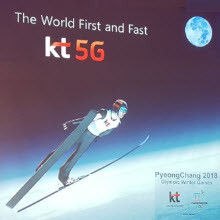 The world’s first 5G network services are set to be displayed at the next year's Winter Olympic Games in Pyeongchang, it has been revealed.

"Displaying 5G network services for the first time in the world at the 2018 Pyeongchang Winter Olympic Games has become possible because of our technological prowess and pre-emptive investments in the field of ICT (information and communications technologies)," Oh Seong-mok, head of the KT Corporation’s network department, was reported as saying by Korea Bizwire.

"We will continue our efforts to prepare even more thoroughly to provide the best and most stable communications services and a variety of 5G services enough to astonish visitors from all around the world at the Winter Olympic Games."

It marked the first time 5G services were successfully demonstrated when connected with real terminals, and not with test equipment, on 5G networks.

Working in collaboration with Samsung, KT Corporation has recently been testing interconnectedness between the 5G Research and Development Centre in Seoul and the 5G Center in Pyeongchang.

In July, Pyeongchang 2018 announced KT Corporation and Coca-Cola as its first sustainability partners.

KT Corporation will provide IT services beyond the Games' boundaries.

It is hoped their work will improve the "tourism readiness" of the province.

They will introduce IT services to Uiyaji Wind Village, which will connect a rural area with the rest of the world for the first time.

KT Corporation was announced as Pyeongchang 2018’s first local marketing partner in 2014, to provide telecommunications services for the Games.

This includes wireless communications, broadcasting facilities and other technology-based infrastructure, while they will help create the first-ever 5G Games.

Yeo Hyung-koo, Pyeonchang 2018's secretary general, has previously claimed the initiatives will benefit the local area in the years after the Games, due to take place from February 9 to 25.