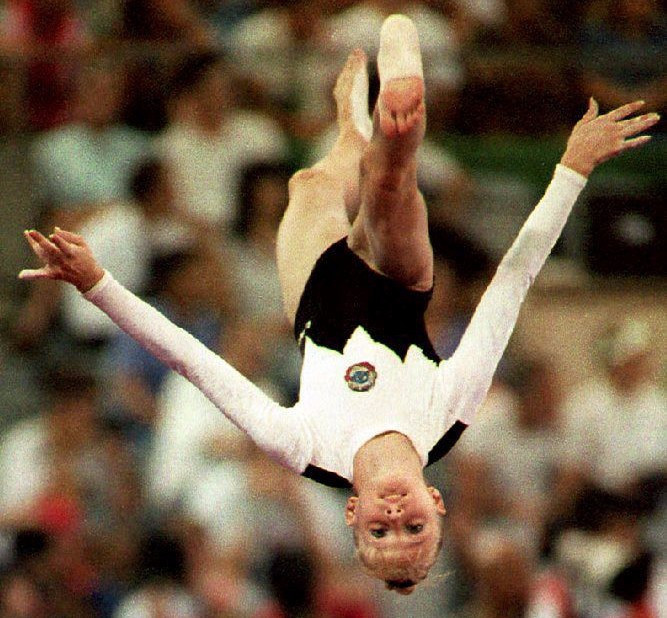 Former Olympic champion Tatiana Gutsu is facing a backlash after accusing "monster" former team-mate and six-time Olympic champion Vitaly Scherbo of sexually assaulting her during a competition in Stuttgart in 1991, when she was aged 15.

She has already been criticised by former team-mates and coaches in Russia for making the allegations, while the mother of Scherbo has suggested she must be seeking some sort of financial compensation from her son.

Gutsu, now aged 41, was born into a Ukrainian family in Odessa and initially represented the Soviet Union.

She won team and all-around titles at the 1992 Olympic Games in Barcelona for the Unified Team, the name used for the sports team of the former Soviet Union.

He was aged 19 at the time of the alleged incident in Stuttgart.

Gutsu also accuses team-mates Rustam Sharipov, a 1996 Olympic gold medalist for Ukraine, and Tatyana Toropova, of staying silent despite being present and aware of what had happened.

"This is me being brave after 27 years," she wrote on Facebook in broken English.

"Tatyana Toropova who I thought was my friend and a team-mate in the National team of USSR thank you for not being brave for me when I need it [sic] you the most to stand, stand up for me and fight for the women rights in such a horrific act, no means no.

"You were there you heard everything you never stand stand up to protect me... Rustam Sharipov [1996 Olympic gold medalist] thank you for being a great body for your friend and not protecting me as a little girl at 15.

"Who rape me in Stuttgart Germany DTB 1991, Vitaly Scherbo, monster who kept me in my own prison to be afraid for so many years.

"I know you will try to [defend] yourself.

"But my details are much stronger than your words, I'm strong now [than] ever, you can't [break] me down anymore.

"This my Cinderella story.

"I survive you and I will supports anyone out there who is afraid to speak out I will try to gain my confidence and straight in myself to help others." 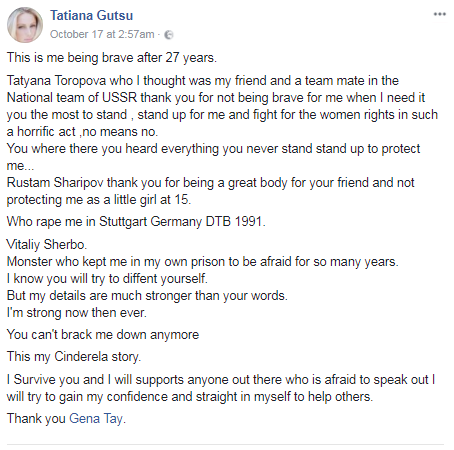 The accusation comes in the midst of the #MeToo campaign encouraging women who have been victims of sexual assault to speak out following the allegations surrounding American film producer Harvey Weinstein.

Gutsu retired from gymnastics after Barcelona 1992 and later moved to United States.

He was inducted into the International Gymnastics Hall of Fame in 2009.

Neither has yet publicly responded.

Scherbo's mother, however, has claimed the allegations are "complete rubbish".

"The most unpleasant thing in this story is that now my son will need to explain himself and, as they say, prove that two plus two isn’t five," she was quoted as saying by gymnovosti.com.

"After all, to accuse someone after almost 30 years - nothing is easier.

"And here is the question: did Tatyana Gutsu not have time to give such a 'confession' before?

"Why did she wait?

"Why did she not give the 'news' right after?

"And now she presents a 'sensation'.

"Of course, the desired effect will be achieved - Gutsu will again be in the focus of media attention.

"It is much more difficult to clear the name of the one who was accused.

"What is the point of accusing Vitaly?

"Perhaps, Tanya, knowing that my son has a business in America, wants to 'strip' him of his money?'"

Toropova, the team-mate Gutsu alleged was aware of what has happened, has also disputed her account.

"I want to say that I have no idea about any rape that occurred on my watch," she told sport.ua, in an article translated by gymnovosti.com.

"I did not see it, nothing like that happened.

"They were friendly and that’s it.

"Of course, maybe he tried to make out with her a little, but rape?"

Lydia Ivanova, a coach of the Soviet Union team at the time, has also questioned the "immodesty" of Gutsu and speculated that "good" athletes would be too tired to have "sexual urges" mid-competition.

"I do not want to talk in details about this and I think that this unseemly," she told 360tv.ru.

"Either she wants to earn money on this or get media attention, nothing more than that.

"It was unpleasant to suddenly hear about it, I’ve never seen any immodesty from this girl before.

"If there is a good, strong training session, what kind of sexual urges can there be?"

"I don’t believe that this could have happened, that Vitaly is capable of such a thing," she told R-Sport.

"He’s the kind of a guy who couldn’t have offended someone like that.

"I don’t believe that she could be silent for 27 years and didn’t share it with anyone.

"Especially since she was a 15-year-old girl - that she didn’t share it, didn’t cry on anyone’s shoulder."