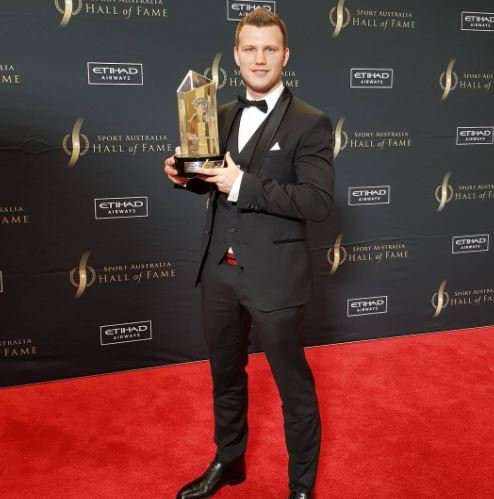 Boxer Jeff Horn has been named as the winner of the prestigious "The Don" prize at the Sport Australia Hall of Fame awards.

Horn was confirmed as the winner of the honour after he became the World Boxing Organization welterweight world title holder this year.

He secured the title by earning a unanimous points decision victory over Filipino icon Manny Pacquiao in July, with his performance ranked as one of the best‐ever wins by any Australian boxer.

The Don Award is widely regarded as Australia's leading contemporary sporting award and is named in honour of cricket legend Don Bradman, the first Sport Australia Hall of Fame inductee.

"It is massive," said Horn, after receiving the award in Melbourne.

"I can remember growing up being inspired by previous winners such as Cathy Freeman and Ian Thorpe.

"To know I am potentially inspiring the future generation of athletes like these guys have done for me is an incredible feeling."

All of the finalists produced moments that brought pride to their country.

Athlete Sally Pearson was nominated again after a remarkable comeback from a career-threatening wrist injury which saw her win her second world 100 metres hurdles title at the World Athletics Championships in London.

"It's amazing. It feels like a dream. I believed in myself and commit myself to training 100% and it paid off" - @jeffhornboxer pic.twitter.com/Lj83VOoCXY

Lauren Burns became the first taekwondo inductee into the Hall of Fame, having been the country's first Olympic taekwondo gold medallist at Sydney 2000.

Bradley McGee was also added, having won gold at Athens 2004 in the men's team pursuit, adding to four previous medals at the Olympics.

The cyclist also earned two World Championship golds on the track, as well as claiming six Commonwealth Games titles and becoming the first Australian to wear the leader's jersey in each of the three Grand Tours on the road.

"It is great to see these exceptional Olympians acknowledged by the Sporting Hall of Fame," said Matt Carroll, AOC chief executive.

"These Olympians are a true source of inspiration and the AOC is proud of what they've achieved in their own careers as well as what they've done to act as motivators for Australian youth.”

Three-time Olympic silver medallist Raelene Boyle was named a legend of Australian sport for her feats on the track as a sports medicine pioneer.

Dr Grace Bryant was inducted as a general member of the Sport Australia Hall of Fame for her work with five Olympic teams.