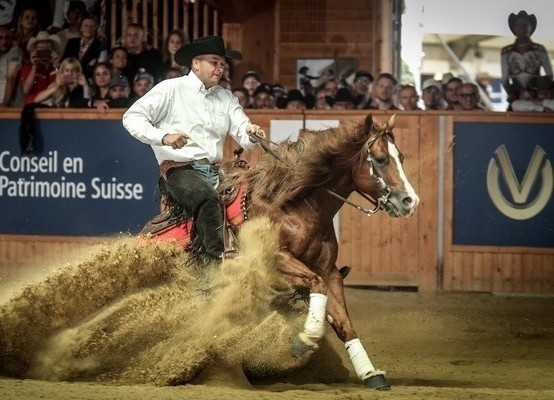 Fonck became the first from his country to top the podium at the event, held this year in Givrins in Switzerland.

"I've had this horse ever since he was a two-year-old and have won quite a few major titles in the reining circuit with him," said Fonck.

"Since I knew that the competition here was tough and the level high, I was aiming for the podium but was not sure if we would be able to claim the gold.

"After the first part of the pattern, I felt that we could actually make it.

"I asked and he delivered and I am thrilled for this very first individual gold medal for Belgium."

Both of the minor medals went to Germany at the CS Ranch venue.

Dominik Reminder scored 222 points on board Dun It With A Splash to edge team-mate Julia Schumacher, who scored 221 riding Coeurs Little Tyke, into bronze.

In the young riders competition, Germany's Gina Schumacher rode Gotta Nifty Gun to a winning score of 224.5 for individual gold.

A run-off was required to decide the silver and bronze with Italians Nico Sicuro and Dino Lulli both finishing on 219.5.

They both returned for one extra maneuver with Sicuro, on board Iam Sailors Brother, securing a score of 219.

Lulli and Sun Dreamin Star only managed 217.5 and had to make do with bronze.

France claimed gold in the junior individual competition as Axel Pesek rode Uncle Sparky to a winning tally of 221.5.

Gabriele Landi performed on Spirit Spanish and scored 217.5 for the bronze.