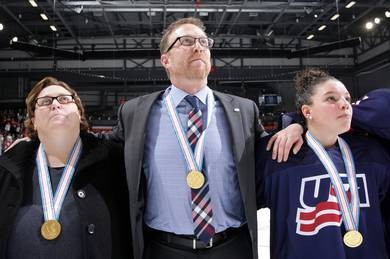 Joel Johnson will continue as the head coach of the United States women's under-18 ice hockey squad, it has been confirmed.

It comes with the American youngsters aiming to win the International Ice Hockey Federation's (IIHF) World Women's Under-18 Championships for the fourth time in a row.

Johnson, also the associate head coach of the University of Minnesota women's ice hockey team, was at the helm for the past three triumphs in 2015, 2016 and 2017.

On all three occasions they beat Canada in the final, including this year when they won the gold medal game 3-1 in Přerov in the Czech Republic on January 14.

"We've enjoyed considerable success with Joel in recent years and we look forward to having him guide our programme for another season," said Reagan Carey, director of women's hockey at USA Hockey.

"Along with Maura and Courtney, we're confident they will help our players reach their fullest potential."

The 2018 World Women's Under-18 Championships will be played in Nizhny Novgorod in Russia on yet to be confirmed dates in January.

Johnson will first lead his side against Canada in the Women's Under-18 Series, taking place on home ice in Lake Placid between August 17 and 20.

"It's always an honour to serve as the head coach of the US Women's National Under-18 team and I look forward to another successful season," said Johnson.

"I love working with our young players and aspire to help them achieve their goals while representing USA Hockey."