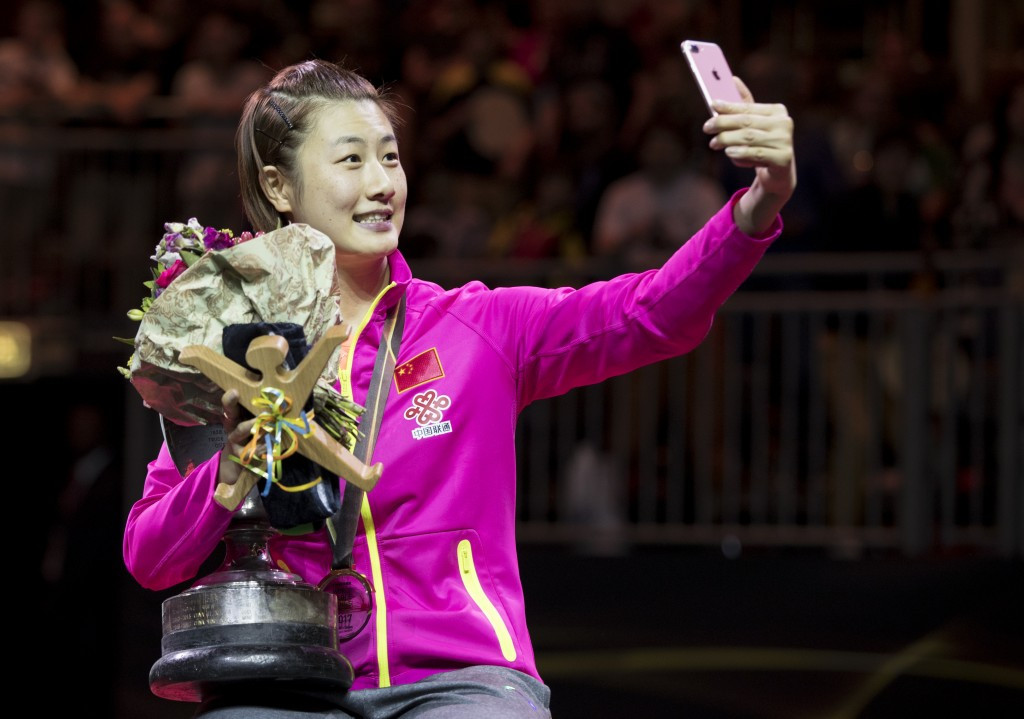 Players from the world's leading nation only suffered defeats today when facing team-mates and always seemed faster, stronger and more consistent than everybody else.

An upset briefly looked on the cards when Zhu led 2-1 and 10-9 in the fourth but her illustrious opponent simply stepped up a level.

The rallies grew longer but Ding's blocking game and basic ability to keep the ball on the table proved too good.

"I came here not expecting to win the World Championships for the third time," the 26-year-old admitted after an injury-impacted build-up.

"It really depended on my state of mind and condition and that of the opponents.

"What is different about the third time is that before I felt like I was challenging for the title and trying to defeat others.

"I am now in the spotlight and others are challenging me."

Ding joined Deng Yaping and Wang Nan as Chinese women to have secured three world titles and could add a doubles success tomorrow.

Another Chinese player, Liu Shiwen, shared the bronze medal with Miu Hirano of Japan after they each lost in yesterday's semi-finals.

China proved too strong for Japan in the men's doubles as Fan and Xu powered past top seeds Masataka Morizono and Yuya Oshima 4-1 in the final.

The Japanese pair ran their opponents close in the first three games but ultimately lost all three.

They rallied in the fourth but victory appeared a formality for the Chinese duo.

It marked a third world men's doubles title for Xu, who also triumphed with Ma Long in 2011 and with Zhang Jike in 2015.

Xu and Fan could yet meet again in the men's singles final tomorrow, although top seed and defending champion Ma is bound to have something to say about that in Xu's half of the draw.

Ma was pushed close by home favourite Timo Boll in a pulsating quarter-final taking place in a thunderous atmosphere before running out a 4-2 winner.

Fan cruised past Koki Niwa, who had earlier beaten fifth seed and German number one Dmitri Ovtcharov 4-3 in the fourth round, in four straight games.

Xu was forced to save five match points against team-mate Lin Gaoyuan this morning to squeeze into the quarter-finals.

A fantastic duel came down to the finest of margins as a forehand loop at 10-7 down finely clipped the edge of the table when it had appeared to be drifting long.

In his third match of the day, after the doubles success, Xu then finally ended the run of 13-year-old Japanese star Tomakazu Harimoto with a 4-1 victory.

Lee Sang-su ensured China will not gain a clean sweep of the podium after his shock third round win over two-time winner Zhang.

This set up a last four clash with Fan tomorrow before the final is due to take place later in the day.