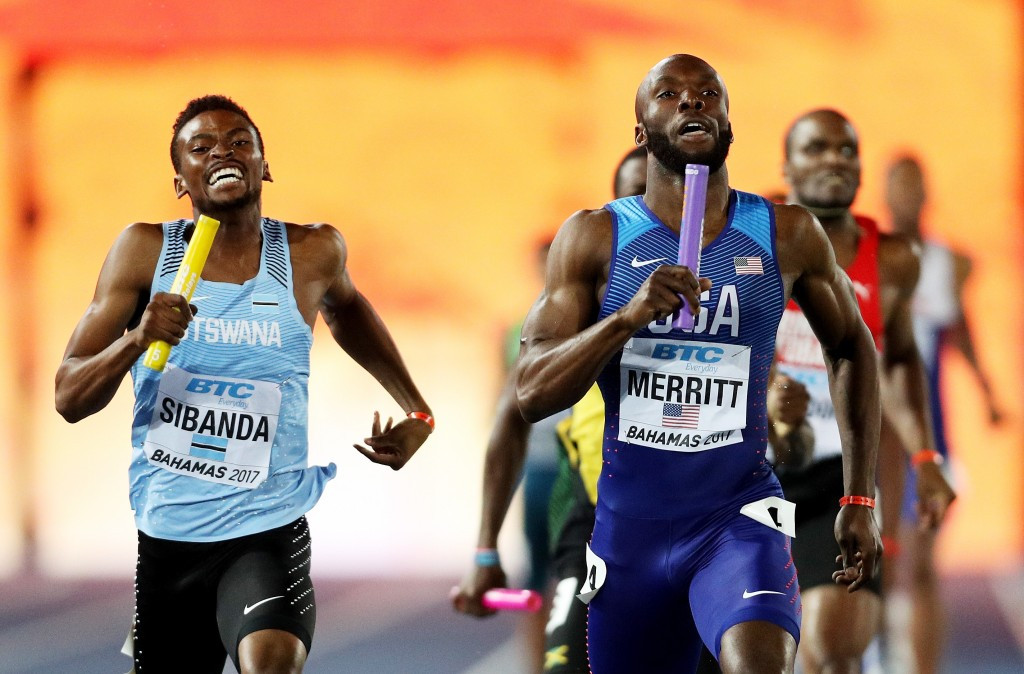 The United States won a third successive Golden Baton as overall winners of the International Association of Athletics Federations (IAAF) World Relays in Nassau, but on an evening that began with rain the sun came out for the hosts with victory in the concluding, new event of the mixed 4x400 metres.

Despite their women’s 4x100m team dropping out of contention when Olympic long jump champion Tianna Bartoletta slipped and fell heavily while awaiting the baton, the US won five of the nine events staged at the Thomas A Robinson Stadium in The Bahamas over the weekend, including the men’s 4x800m, where they defeated Kenya.

Bartoletta’s slip opened the way for an unexpected win by Germany, anchored by Rebekka Haase.

With eight points on offer for first place down to one for eighth, the US finished on 60, 21 ahead of Jamaica, whose men’s 4x100m team, lacking Usain Bolt and denied the services of Asafa Powell at short notice, failed ignominiously to carry the baton through the heats.

Australia took third place overall with 24 points, one ahead of Poland.

The home arena resounded to the national anthem at the end of the evening after The Bahamas quartet, including 21-year-old rising talent and national record holder Steven Gardiner and Olympic women’s 400m champion Shaunae Miller-Uibo finished on a high after the disappointment of the men’s 4x400m team, Olympic champions in 2012, failing to reach the final.

Olympic bronze medallist Clayton Murphy of the US concluded one of the surprises of the night as he moved clear of Kenya’s Ferguson Rotich on the final leg of a 4x800m to win in 7:1316.

As the crowd produced one of the biggest cheers of the night, the Refugee Team’s fellow competitors stood and applauded in appreciation as Lokinyomo approached the finish.

"We've never run in this type of relay before so it was all new," said Amotun.

"We didn't run that well, but with this experience, we will go home and keep working and everything will be good."

The men’s 4x400m saw 18-year-old Botswana athlete Karabo Sibanda laying down a marker for this summer’s IAAF World Championships in London as he chased narrow winner LaShawn Merritt, the US former Olympic and world champion, all the way to the line.

The US women’s 4x400 team produced another dominant performance, winning by nearly four seconds in 3:24.36 ahead of Poland, for whom anchor runner Justyna Swiety moved up from fourth, passing Jamaica in the final few metres.

Canada’s men jolted the US winning run in the 4x200m thanks to a big effort from Olympic silver medallist Andre De Grasse, winning in 1:19.42.

The biennial IAAF/BTC World Relays is due tol return to Nassau in 2019.