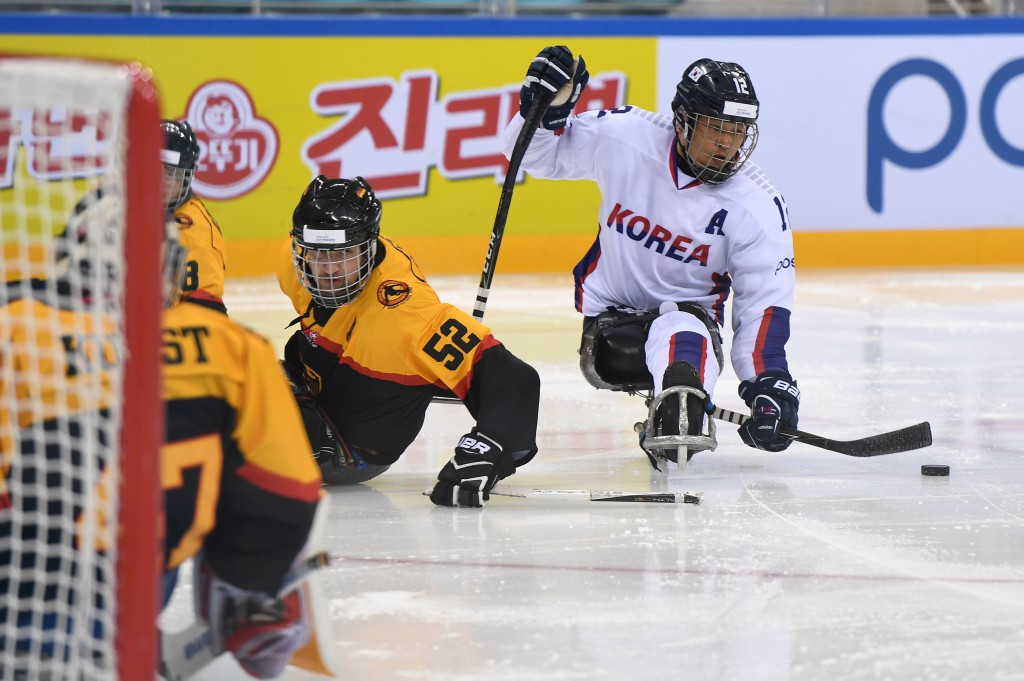 Hosts South Korea were victorious on the opening day of the 2017 World Para Ice Hockey Championships A-Pool today as they claimed a narrow 2-1 win over Germany.

The tournament, acting as a Pyeongchang 2018 Winter Paralympics qualifier, is taking place at the Gangneung Hockey Centre, the same venue where the Para ice hockey matches are due to take place at next year's Games.

Following a scoreless first period Jongkyung Lee, who captained South Korea to a silver medal at the 2012 World Championships, opened the scoring three minutes into the second as he lifted the puck up and under the bar following a sublime pass from Seung-Hwan Jung.

Germany’s Robert Pabst levelled the score after firing into the Korean net before Jung, a Pyeongchang 2018 ambassador, scored the winning goal with just three minutes remaining in the contest.

The North Americans scored six times in the opening period.

Tyle McGregor opened the scoring just 30 seconds into the game with Kevin Sorley, Ben Delaney, Adam Dixon, Liam Hickey and captain Greg Westlake all finding the net to put the Canadians 6-0 up at the end of the first period.

Three-time world champion Billy Bridges capitalised on a loose puck to add a seventh before Westlake and McGregor scored second goals to complete the rout.

"It was a lot of fun out there," said Westlake.

"It was fun to go out there and play our first game where the Paralympics will be.

"I know a lot of the guys were fired up about that.

"That’s just one down, and we have a lot of games to go, but if every game can go like that then we’ll be good."

In the third and final match of today, Italy collected a 2-1 victory over Sweden.

Sandro Kalegaris opened the scoring in the first period for the Italians before 19-year-old Christoph Deapoli doubled their advantage.

Sweden’s Per Kasperi pulled one back just 59 seconds later but the Italians managed to keep their continental rivals out to claim the win.