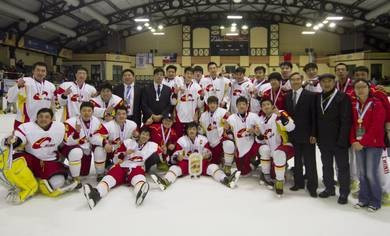 China has won promotion to the 2017 International Ice Hockey Federation World Championship Division II Group A as they continue their preparations for the 2022 Winter Olympic Games in Beijing.

China went through the tournament unbeaten and were in dominant form in Auckland in New Zealand.

They beat the hosts, Israel, North Korea, Turkey and Mexico to finish top of the standings at the Paradice Ice Skating Rink.

The nation has won 53 medals at the Winter Olympics but has never competed in a men's ice hockey tournament.

China fell at the opening stage of qualification for the Pyeongchang 2018 Winter Olympics.

The women's team finished fourth at Nagano 1998 and seventh at both Salt Lake City 2002 and Vancouver 2010.

China have enjoyed success in the men's tournament of the Asian Winter Games, winning the gold medal in 1986 and 1990 when both events were held in Sapporo.

They also bronze medals at Harbin 1996, Gangwon 1999 and Aomori 2003 but have failed to translate that form to the Olympics.

China's head coach Jiang Hu believes that although his team has shown progress but must continue to improve if they are to stand any chance of having a successful Olympic campaign on home ice.

"China is staging the Olympic Winter Games in 2022," Hu said.

"To play well at the Olympics we need to put in a lot of effort and improve our team to a very high level.

"That is very important to us at this time.

"We have put in a lot of effort in training and in all the games.

"The team management and the players are very happy about this and are very satisfied.

"We have received a lot of respect from our opponents, and that is very pleasant for us."

The introduction of the team has been hailed as a valuable opportunity to develop Chinese players ahead of Beijing 2022, in a league which mainly features Russian teams but also includes representation from Belarus, Croatia, Finland, Kazakhstan, Latvia and Slovakia.

Kunlun Red Star will compete in the LeSports Arena in Beijing, constructed to stage basketball competition at the 2008 Olympics in Beijing, but will host ice hockey during the 2022 Games.

China has also been receiving support from ice hockey power the Czech Republic ahead of Beijing 2022 in a bid to improve at a winter sport in which they have never excelled.

Hu also praised the country's national and local authorities and the support they are providing to ice hockey within the country.

"Because we are holding the Olympics all the local programmes and the local and national hockey teams are being supported," Hu said.

"The Olympic Games is bringing more attention to ice hockey.

"Players are putting more effort into their work to get selected in national teams and they are very enthusiastic about this.

"To help us the Ll Government has organised a lot of competitions.

"We have never had this type of support before."