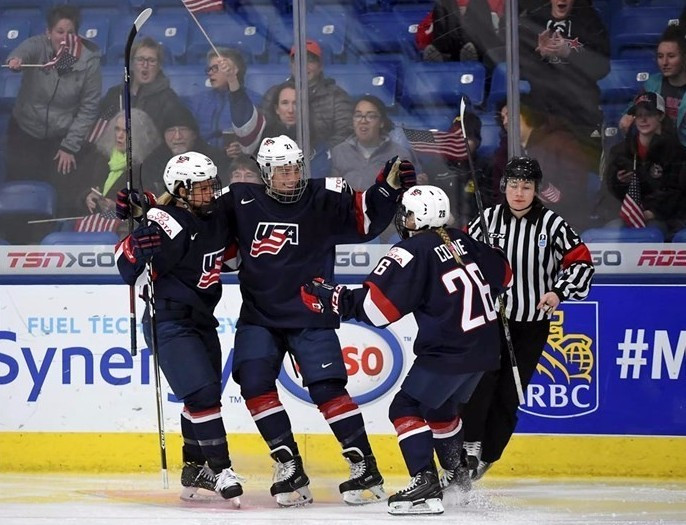 The United States and Canada both eased their way into the final of the International Ice Hockey Federation (IIHF) Women's World Championship with comfortable last four wins over Germany and Finland respectively today.

Hosts the US took just 66 seconds to take the lead in their 11-0 success at the USA Hockey Arena in Plymouth in Michigan.

Kendall Coyne burst down the left and made a quick pass to Hilary Knight, who fired a shot past German goalkeeper Jennifer Harss.

The goal that saw the Americans double their lead was fortunate with the puck deflecting off of Bernadette Karpf's stick, only to loop over Harss and into the net.

In the second period, the Americans were unstoppable as they scored five goals in just four minutes.

Coyne scored two of the five as the US ran riot, much to the delight of the home crowd.

Megan Keller, Jocelyne Lamoureux-Davidson and Emily Pfalzer were also on target during the Americans' period of dominance.

The US added four more goals in the final 20 minutes with Amanda Pelkey, Monique Lamoureux, Haley Skarupa and Alex Carpenter all adding their names to the scoresheet.

It means that the US are into the final of a tournament the players threatened to boycott over a pay dispute before it was eventually resolved.

Standing between the Americans and the gold medal tomorrow will be their fiercest rivals Canada, who beat Finland 4-0.

Finland had defeated Canada in the pool stages but it was the Canadians who eased to victory today.

Canada opened the scoring after 17 minutes when the loose puck fell to Sarah Potomak to fire into the net.

The Canadians added two more goals in the second period, with Marie-Philip Poulin unleashing a fierce shot into a small gap above the keeper's shoulder before Rebecca Johnston made it 3-0 on a power play.

Emily Clark then completed the rout with five minutes left to play.

Finland are now due to take on Germany in the bronze medal match.

Russia secured fifth place following a 4-3 win over Sweden, while Switzerland pulled level in their best of three relegation round series with the Czech Republic.

After losing the opening match, the Swiss team claimed a 3-2 overtime win to take the series to a deciding match tomorrow.