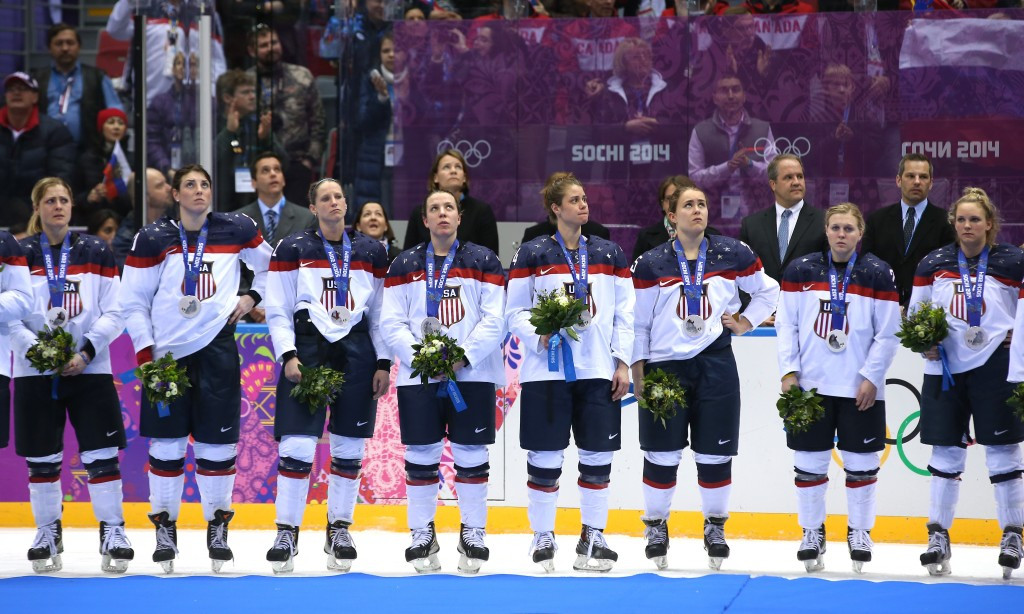 Defending champions the United States have threatened to boycott their home World Women’s Ice Hockey Championship in Plymouth later this month due to a row over wages.

The US team has won the last three titles at the International Ice Hockey Federation (IIHF) sanctioned event, but they are set to decline the opportunity to defend their crown following a dispute with USA Hockey.

The tournament at the USA Hockey Arena in Michigan is scheduled to run from March 31 to April 7.

Several players, including captain Meghan Duggan tweeted a link to a statement today, under a title which read: "US WNT will not play in the World Championship due to stalled negotiations over fair wages and support from USA Hockey."

The women's team are attempting to secure fair wages and support equal to the men's programme.

Law firm Ballard Spahr are reportedly representing the women's side and have cited the Ted Stevens Olympic and Amateur Sports Act as a reason for their grievance.

It "requires USA Hockey to provide equitable support and encouragement for participation by women where, as is the case with hockey, separate programs for male and female athletes are conducted on a national basis", according to the firm.

US WNT will not play in 2017 World Championship due to stalled negotiations over fair wages and support from USA Hockey #BeBoldForChange pic.twitter.com/LYphd7uT38

"The members of the US women's national hockey team announce that we will not be playing in the 2017 IIHF Women's World Championship in Plymouth, Michigan unless significant progress has been made on the year-long negotiations with USA Hockey over fair wages and equitable support," the statement read.

"We have asked USA Hockey for equitable support as requited by the Ted Stevens Amateur Sports Act.

"The goals of our requests are to achieve fair treatment from USA Hockey, to initiate the appropriate steps to correct the outlined issues, and to move forward with a shared goal of promoting and growing girls and women in our sport while representing the United States in future competitions, including the Women's World Championship.

"Putting on the USA jersey represents the culmination of many years of hard work and sacrifice that reflect our love of both hockey and country.

"In making these requests, we are simply asking for USA Hockey to comply with the law."

Two-time Olympic silver medallist Hilary Knight told the Chicago Tribune that the players were aware of the severity of the issue and the impact their decision might have.

"We've been asking for equitable support for over a year now," said Knight.

"It sort of seemed like the stars were aligning and this is the right time to do it.

"We have a great group of leadership and great player pool.

Their boycott threat is not likely to affect their participation at next year's Winter Olympic Games in Pyeongchang as they have already qualified, although they could feasibly decide not to travel to the South Korean resort if the impasse with USA Hockey continues.

The move represents a similar scenario to the women's national football side threatening not to compete at last year's Olympic Games in Rio de Janeiro.

They eventually agreed to take part but suffered a shock quarter-final defeat at the hands of eventual silver medallists Sweden.

The US team has been drawn in Group A, along with Canada, who they have beaten in the previous three gold medal matches, Russia and Finland at the IIHF World Women’s Ice Hockey Championship.

In response, USA Hockey said they were "disappointed that players from the women's national team programme have said today they do not intend to participate".

They claim they "remain committed to continuing dialogue and will field a competitive team" at the event later this month.

"USA Hockey, along with the United States Olympic Committee, provides the women’s national team players financial support, as well as training opportunities, camps, and strength and conditioning programmes, to help these athletes and give them the best chance to succeed," the statement read.

"The support USA Hockey is implementing in order to prepare the women's national team for the 2018 Winter Olympic Games includes a six-month training camp, additional support stipends and incentives for medals that could result in each player receiving nearly $85,000 (£70,000/€79,000) in cash over the Olympic training and performance period.

"The sum is in addition to a housing allowance, travel allowances, meal expenses, medical and disability insurance and the infrastructure that includes elite-level support staff to train and prepare the players."

The statement has been criticised by players on social media, however, with Duggan claiming she was "disappointed with this misleading response".

Monique Lamoureux described it as "disheartening and dishonest".

"We acknowledge the players’ concerns and have proactively increased our level of direct support to the women's national team as we prepare for the 2018 Winter Olympic Games,” said Dave Ogrean, executive director of USA Hockey.

“We have communicated that increased level of support to the players’ representatives and look forward to continuing our discussions.”