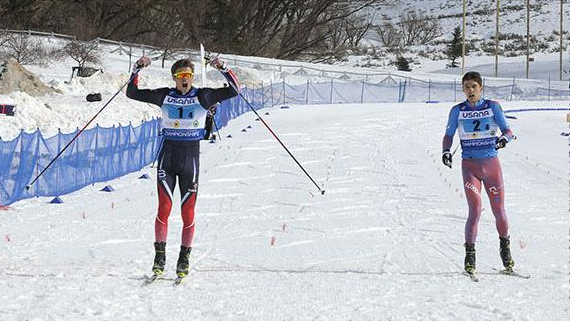 Norway and Russia won the respective men’s and women’s cross-country relays as action came to a close at the International Ski Federation (FIS) Nordic Junior World Championships in Park City in the United States today.

Rounding out the podium was the French team of Martin Collet, Camille Laude, Hugo Lapalus and Arnaud Chautemps, who finished more than a minute behind.

It was a tight battle coming into the stadium between Larsen and Vechkanov, with the former finding himself on the outside of the 180-degree turn into the final 100 metres.

The Norwegian had strong momentum though and made his move at the finish line to take the gold medal.

"We were thinking a lot about this before the race," Larsen said.

"We knew it would be Russia and Norway on the last leg.

"We were confident if we stayed with Russia we could take them.

"Russia’s machine is on the uphills, but they weren’t fast enough in the end."

In the women’s 4x3.33km event, Russia’s Polina Nekrasova, Lidia Durkina, Anna Zherebyateva and Mariya Istomina came out on top in 34:45.3.

Italy’s Martina Bellini, Anna Comarella, Francesca Franchi and Cristina Pittin were 20.6 seconds back in the runners-up spot, while the United States’ Hailey Swirbul, Julia Kern, Hannah Halvorsen and Katharine Ogden were 25.8 seconds behind in third.

"It was hard because this mountain is very difficult," Durkina said.

"But we are the best country and we lap all the world."

Bronze for the US secured their first-ever relay medal at the FIS Nordic Junior World Championships.

The final gold medal of this year’s Championships went the way of Slovenia, who defended their mixed team normal hill ski jumping title at the Utah Olympic Park.

They won with a total of 925.3 points, 34.7 more than closest challengers Agnes Reisch, Martin Hamann, Gianina Ernst and Constantin Schmid of Germany.