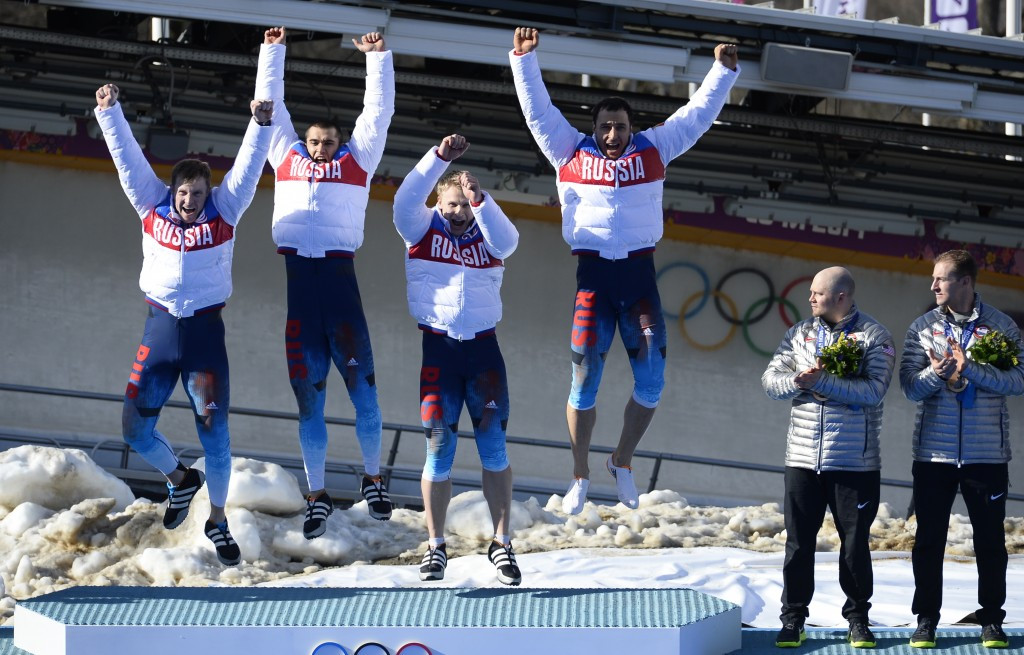 Two track and field athletes have also been sanctioned, along with two wrestlers, one rower and one weightlifter.

No details of what offence the athletes committed, or what substances they failed for, have yet been released.

Trunenkov’s sanction was imposed by the Russian Bobsleigh Federation (RBF), following materials provided by the Russian Anti-Doping Agency (RUSADA) Disciplinary Committee, who deemed there had been a breach in anti-doping rules.

The bobsleigh pusher has been handed a four-year ban from the sport.

Trunenkov’s period of ineligibility has been backdated to April 19, 2016.

He was a member of the Russian four-man bobsleigh team which won gold at the Sochi 2014 Winter Olympics on home ice.

The crew was piloted by Alexandr Zubkov, who now heads the RBF, with Alexey Negodaylo and Alexey Voyevoda completing the team.

Zubkov has also been the subject of allegations in the past year, after he was among 15 Russian athletes named in The New York Times by Grigory Rodchenkov, the former head of Russia's discredited laboratory in Moscow.

Rodchenkov alleged the athlete had been part of a doping programme in the build-up to Sochi 2014.

Trunenkov's sanction comes as a further blow to Russian bobsleigh, with the country stripped of this year’s International Bobsleigh and Skeleton Federation (IBSF) World Championships which were due to take place in Sochi.

When removing Sochi of the Championships last year, the IBSF said that "during this difficult time it is prudent not to organise such an event in Russia".

It followed the McLaren Report alleging that more than 1,000 Russian athletes have been implicated in a doping scheme, including medal winners in sliding sports at Sochi 2014.

Olympic champion Alexander Tretiakov and three other Russian skeleton athletes were named, but the IBSF ruled earlier this month that there was not enough evidence to keep provisional suspensions issued against the quartet in place.

Race walker Alexander Yargunkin has also been handed a four-year ban from athletics.

He was the sole Russian entered in race walking for the 2015 World Championships in Beijing, after numerous others from the country were sanctioned for doping offences.

Yargunkin eventually did not compete at the Championships in the Chinese capital, after reportedly testing positive for erythropoietin (EPO).

Javelin thrower German Komarov, a bronze medallist at the 2013 European Junior Athletics Championships, has been handed the same length ban.

Yargunkin’s ban was backdated to August 25, 2015, while Komarov’s sanction began on June 25 in the same year.

Wrestler Khatuev Turpal has been given a two-year ban, while his team-mate Adlan Minapov has received a four-year sanction.

A four-year ban was also given to weightlifter Viktoriya Kosenkova, while rower Yuliya Solomentseva was handed a one-year sanction.