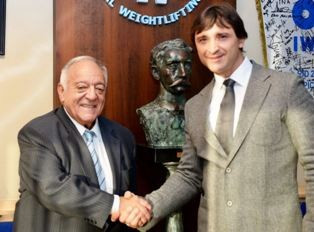 Russia has dropped an appeal at the Court of Arbitration for Sport (CAS) against a one-year ban imposed by the International Weightlifting Federation (IWF) because of its poor doping record.

The case was due to be heard at the CAS headquarters here today but the Russian Weightlifting Federation (RWF) withdrew it.

It followed a meeting between the new President of the RWF, Maksim Agapitov, and Tamas Ajan, head of the IWF, at the world governing body's headquarters in Budapest last night.

Russia were banned because they breached a new IWF rule that any country producing three or more positive tests following re-analysis of drugs samples from Beijing 2008 and London 2012 would be suspended from the sport for a year.

It was ruled that the "integrity of the weightlifting sport has been seriously damaged on multiple times and levels...therefore an appropriate sanction was applied in order to preserve the status of the sport".

Agapitov, the 1997 World Championship 91 kilograms gold medallist, took over as President of the RWF last November.

He replaced Sergei Syrtsov, who had been in charge since 2010 but quit in September after taking the blame for a large number of doping offences involving the country's weightlifters.

Agapitov, who himself served a two-year doping ban from 1994 until 1996, promised Ajan that he would work with the IWF to help clear up the sport in Russia.

"Our main objective is to restore order and discipline," he said.

"Discipline in the anti-doping fight and in the organisation of the training process."

CAS are due to hold a hearing with the Belarusian Weightlifting Union and Weightlifting Federation of the Republic of Kazakhstan tomorrow.

They are also facing one-year bans following the re-tests from Beijing 2008 and London 2012.

Azerbaijan, Armenia, China, Moldova, Turkey and Ukraine are all facing similar bans once the International Olympic Committee has confirmed all outstanding cases.

Bulgaria also missed Rio 2016 after they were banned following 11 lifters testing positive for the banned anabolic steroid stanozolol at a training camp in Tbilisi in Georgia last March.