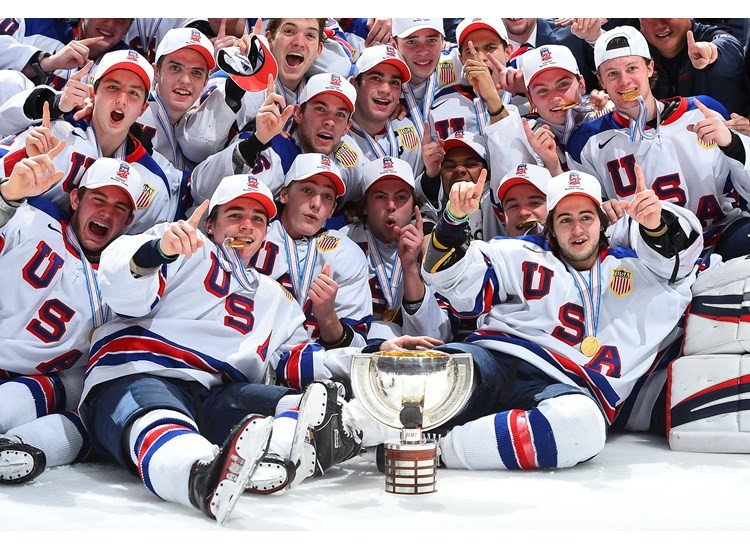 Troy Terry was once again the hero for the Americans as he was the only scorer in the shootout inside the Centre Bell arena.

Yesterday, Terry scored three goals in a shootout to defeat Russia and send his country to the gold medal match.

American goalkeeper Tyler Parsons also performed heroics as he stopped all five Canadian shooters, none of whom came particularly close to scoring.

Six days earlier, the US had defeated Canada 3-1 in the preliminary rounds but struggled in the early stages of the final as they fell behind.

The opening goal for the hosts came from defenceman Thomas Chabot.

Soon after the hosts had doubled their lead, following a scramble in the US goal mouth.

The puck fell to Jeremy Lauzon who arrowed a shot into the net.

Not long into the start of the second period the US increased the tempo of their play and began to dominate.

The reward for their efforts soon arrived as Jordan Greenway found Charlie McAvoy who had plenty of time to take aim and drill a shot to cut the deficit.

Not long after, they were level.

A shot from Adam Fox drifted towards goal and deflected off Kieffer Bellows on the way through to tie the game.

After having their lead cut by the Americans, Canada once again found themselves ahead after Nicolas Roy unleashed a fierce shot over Parsons' shoulder.

Just under three minutes later, they made it 4-2 when Mathieu Joseph raced past Casey Fitzgerald before finishing past a helpless Parsons.

But the resilient Americans would once again mount a comeback.

Fox then found Colin White with a sensational pass not long afterwards and his touch found the back of the net to once again to level the scores.

The 20-minute, five-on-five overtime period was dominated largely by the hosts but both teams had several chances to claim the gold medal.

Once again the teams could not be separated, taking the final to a shootout which was won by the Americans in front of a crowd of 20,173 people.

"We came together as a team," said White, the alternate captain for the US team.

"Four weeks now we’ve been together, and to win a gold medal together is just great.

"The calmness we’ve had all tournament was huge."

Russia have now won their seventh consecutive medal at the championships.