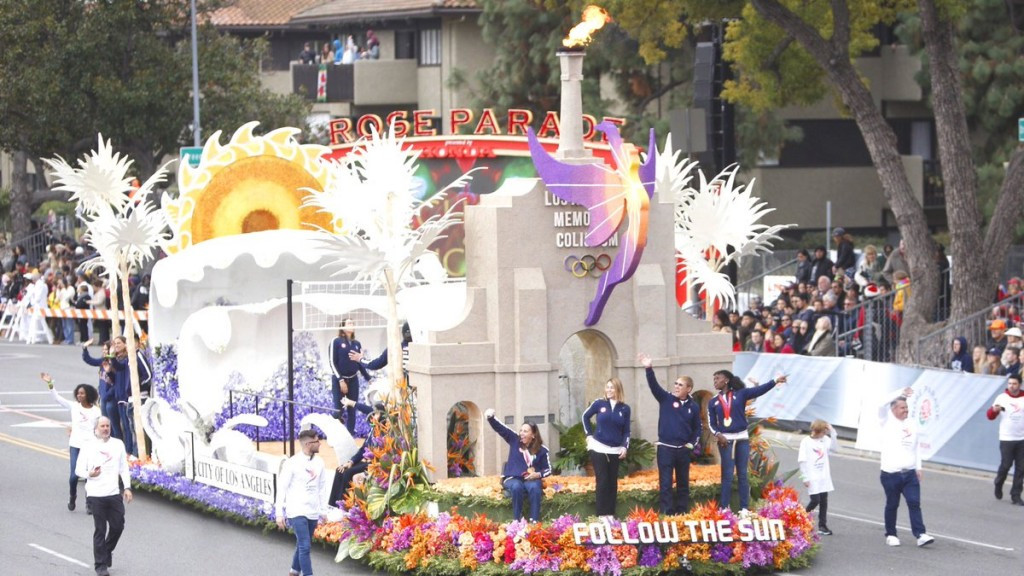 The Bid Committee partnered with the Los Angeles Tourism & Convention Board to produce a flower-covered float brandishing LA 2024’s slogan "Follow the Sun".

Hundreds of thousands of spectators lined the streets of Pasadena in LA County to watch the parade which bills itself as America's New Year’s greeting to the world, joined by millions more watching across the globe.

Among those joining her were Romania’s five-time Olympic gold medal-winning gymnast Nadia Comaneci, a naturalised citizen of the US, as well as her husband Bart Conner, who won two gymnastics gold medal medals at the Los Angeles 1984 Olympics.

They were accompanied by several young Angeleno athletes with the LA84 Foundation, the youth sports non-profit organisation.

Olympians and LA 2024 Athletes' Advisory Commission leaders Janet Evans, Allyson Felix and Greg Louganis were the Tournament of Roses Grand Marshals, and rode in vintage cars behind the "Follow the Sun" float.

They then participated in the coin toss to kick-off the Rose Bowl American football game between Penn State Nittany Lions and University of Southern California Trojans, which the latter won 52-49.

More than 500 volunteers helped decorate the "Follow the Sun" float, which featured the landmark Los Angeles Memorial Coliseum at the front with a flame burning atop its cauldron.

More than 10,000 roses in various shades, from light yellow to hot pink, ran along the length of the float.

Budapest and Paris are also bidding for the 2024 Olympic and Paralympic Games.

The IOC is due to elect its chosen host city at its Session in Lima on September 13.