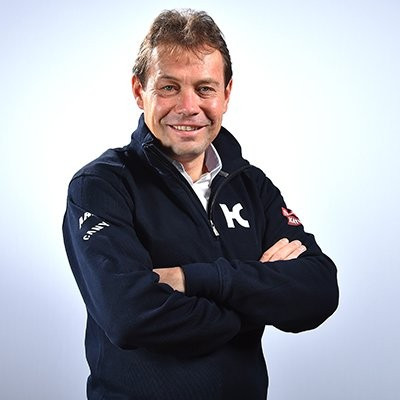 The 50-year-old was chosen in Moscow after sole rival Alexander Vinokourov announced his withdrawal.

It follows Ekimov's recent decision to stand-down as general manager of the Katusha cycling team.

Businessman Igor Makarov was not standing for the Presidency after leading the organisation since 2010.

"In 2010, I put forward a candidate, then my attempt carried adventurist character," Ekimov told the TASS news agency after his election.

"Over the past six years, I have gained experience of administrative work and my nomination this time is serious and I thank all the regional representatives for their support."

Vinokourov, who is no relation of the Kazakhstan cyclist of the same name, added: "I think Ekimov is a great manager and a person who is able to give much to the domestic cycling.

"He is running for President of the Federation for the second time, and I decided to withdraw his candidacy in favour of it.

"I myself will continue to work in the Board of Trustees and to organise domestic competitions."

Ekimov was a member of the gold medal winning Soviet Union team pursuit squad at Seoul 1988 before focusing on the road thereafter.

He won the first of three stages of the Tour de France in 1991 before cycling for the US Postal Service team as a key lieutenant for Armstrong between 1997 and 1998 and again from 2000 until 2008.

He claimed individual time trial gold at Sydney 2000 ahead of Germany's Jan Ulrich and Armstrong, who was subsequently disqualified after admitting taking performance enhancing drugs.

Ekimov has never been directly implicated in a doping scandal, but was named by another former team-mate, Floyd Landis, in a lawsuit as one of the US Postal riders who received a blood transfusion midway through the 2004 Tour de France.

Ekimov, who was named Russian Cyclist of the Century in 2001, has led Katusha during a period in which team member Joaquim Rodríguez won the 2013 International Cycling Union (UCI) World Tour series as well as two stages of the Giro d'Italia.

But the team narrowly avoided a UCI suspension earlier this year after two of its riders failed drugs tests within 12 months.

Russian rider Eduard Vorganov tested positive for meldonium in January after Italian Luca Paolini was suspended on July 10 following a positive test for cocaine during the Tour de France.

A UCI Disciplinary Commission voted not to impose the suspension because Paolini's drug use was deemed recreational rather than performance-enhancing.

Ekimov has been replaced by José Azevedo as the team's general manager for the 2017 season.