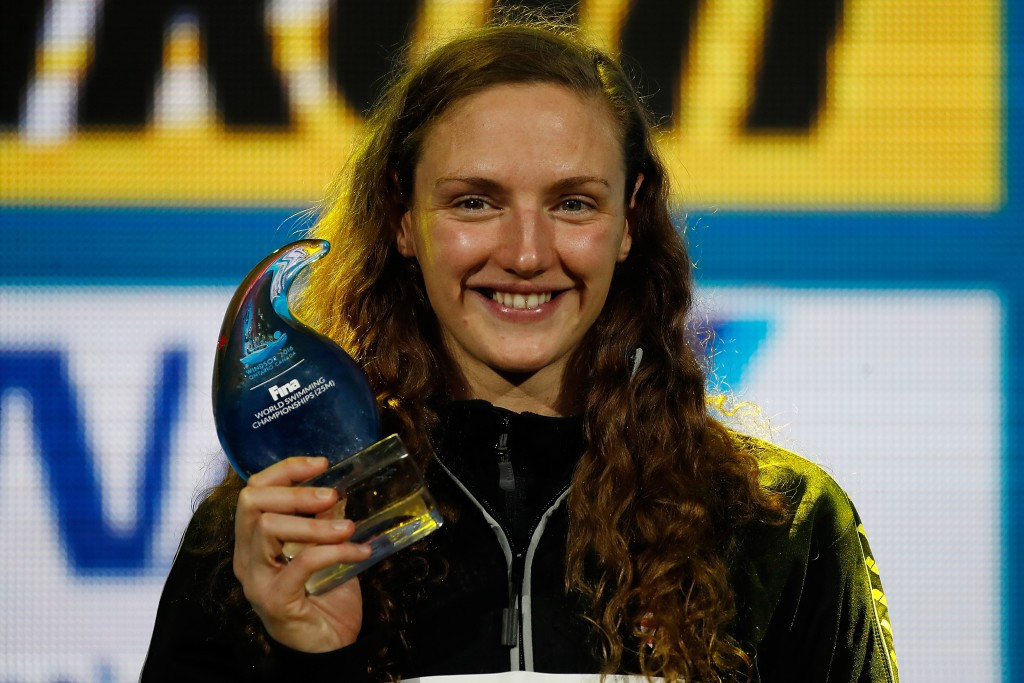 Hungary’s Katinka Hosszú was named the best female athlete of the 2016 International Swimming Federation (FINA) World Short Course Championships after claiming her seventh gold medal on the final day of action at the WFCU Centre in Windsor.

United States’ Kelsi Worrell had to settle for the silver medal in 55.22, while Japan’s Rikako Ikee took the bronze in 55.64.

The sixth and last day of the Championships started with hosts Canada claiming their second gold medal with success in the women’s 4x50m freestyle relay.

Anchored by 16-year-old Penny Oleksiak, the home favourites completed the race in 1:35.00 to leave defending champions The Netherlands second in 1:35.37.

Italy got the bronze in 1:35.61, with final swimmer Federica Pellegrini adding another medal to her rich roll of honour that includes a total of five world titles.

The longest final of the programme was the men’s 1,500m freestyle, won by four-time Olympic medallist Park Tae-hwan of South Korea in a Championships record of 14:15.51.

Italy’s Gregorio Paltrinieri - the defending champion, reigning Olympic gold medallist and world record holder - had to be content with silver in 14:21.94, while Poland’s Wojciech Wojdak earned bronze in 14:25.37.

Victory for Park sees him add to his 200m and 400m freestyle crowns won earlier in the week and end a turbulent season, which saw him fight to compete at the Rio 2016 Olympic Games after serving a drugs ban, only to leave Brazil without a medal, on a high.

Minutes after his win, Park returned to the pool for the men’s 100m freestyle final but could only manage a seventh-place finish.

Simonas Bilis claimed the gold medal in 46.58, ensuring the first-ever triumph for a Lithuanian male swimmer in the history of the Championships.

Silver was earned by Shinri Shioura in 46.59, while Australia’s Tommaso D’Orsogna completed the podium in 46.70.

In the women’s 200m breaststroke, Great Britain’s Molly Renshaw beat Canada’s Kelsey Wog to the top of the podium by just 0.01 seconds.

A time of 2:18.51 secured her maiden title at this level and Britain’s first triumph in the event in the history of the Championships.

The bronze medal went the way of Renshaw’s fellow Briton Chloe Tutton in 2:18.83.

Poland’s Radoslaw Kawecki was one of the heroes of the day after winning the men’s 200m backstroke - his third consecutive victory in the event.

After a bronze medal in 2008 and silver medals in 2010 and 2014, South Africa’s Cameron van der Burgh finally earned gold in the men’s 50m breaststroke.

Slovenia’s Pieter Stevens got the silver in 25.85, while Brazil’s Felipe Lima earned bronze in 25.98.

In the women’s 50m freestyle, it was a clear victory for The Netherlands’ Ranomi Kromowidjojo in 23.60.

The silver medal went to Italy’s Silvia Di Pietro in 23.90, with the bronze going the way of American Madison Kennedy in 23.93.

Russia and the US fought hard for the victory in the men’s 4x100m medley relay, with the Europeans - anchored by Vladimir Morozov in a superb time of 45.58 - finally getting the gold in 3:21.17.

The US initially touched for silver, but a subsequent disqualification - two butterfly kicks in the breaststroke leg by Cody Miller - allowed Australia to take second in 3:23.56 with Japan third in 3:24.71.

The consolation for the US came a few minutes later in the women’s 4x100m medley relay, swimming for gold in 3:47.89 which improved the Championships record time of 3:48.29 clocked by China in 2010.

Despite an extremely quick anchor leg of 51.07 by Oleksiak, Canada could not take the lead following a bad 75m turn in the butterfly swim from Katerine Savard.

South Africa’s Chad le Clos was named the best male athlete of the Championships having claimed world titles in the 50m, 100m and 200m butterflys, and a silver in the 200m freestyle.

He also established the only individual world record in Windsor, 48.08 in the 100m butterfly.

The US won the trophy for the best team of the Championships, ranking first in the medal table with eight golds, 15 silvers and seven bronzes.

They were also responsible for the second world record of the competition, a time of 1:43.27 in the women’s 4x50m medley.

Hungary were second in the medal table with seven golds, two silvers and two bronzes, while Russia were third with six golds, five silvers and three bronzes.