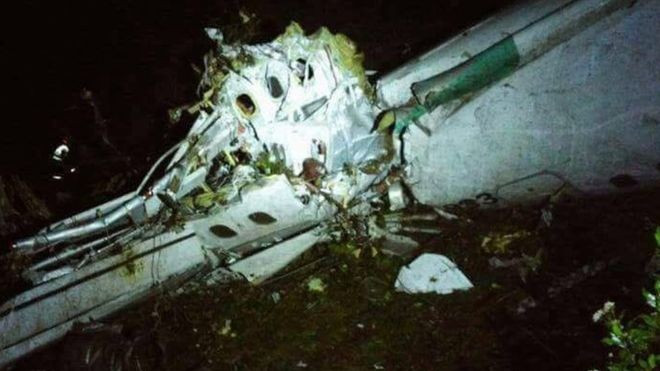 A plane carrying members of Brazilian football team Chapecoense has crashed on its approach to Medellin, killing 76 of the 81 people on board according to police in Colombia.

The team was due to play against Medellin-based side Atlético Nacional in the first leg of the final of the Copa Sudamericana, South America's second most important club competition behind the Copa Libertadores.

The match was scheduled for tomorrow but has now been suspended.

Original reports said there were six survivors, including players, a crew member and travelling journalist, but police said one had died in hospital.

Bad weather meant that the crash site was only accessible by land and the rescue operation was later suspended as heavy fog prevented helicopters from landing.

It is believed to have started its journey in São Paulo in Brazil at 3.35pm local time.

The plane set off for Medellin having made a stop in the Bolivian city of Santa Cruz de la Sierra.

In a statement, José María Córdova International Airport in Medellin said that at 10pm a plane travelling from Santa Cruz de la Sierra had reported an electrical fault to the control tower between La Ceja and La Unión.

"May God be with our athletes, officials, journalists and other guests travelling with our delegation," Chapecoense said in a short statement.

Colombia’s El Tiempo newspaper said there were at least 22 players from the squad on board.

A 23rd player, whom was not named, had been due to travel but did not.

One of the survivors was confirmed as Chapecoense defender Alan Ruschel, who was the first player to be taken to hospital.

Reports suggest that at least two other footballers - goalkeepers Jackson Follman and Danilo - may have survived, as well as physiotherapist Rafael Gobbato.

Federico Gutierrez, the Mayor of Medellin, described the crash as a "tragedy of huge proportions".

The South American Football Confederation (CONMEBOL) said it was suspending "all activities" and that its President, Alejandro Dominguez, was on his way to Medellin.

"The CONMEBOL family greatly regrets what happened," a statement reads.

Chapecoense, based in the city of Chapecó in the state of Santa Catarina, play in Série A - Brazil’s premier division.

The winner of the Copa Sudamericana gains automatic entry into next season’s Copa Libertadores.

Atlético Nacional were due to visit Brazil for the return leg of the final on December 7.