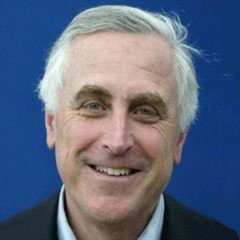 Tomorrow's vote will take place as part of organisation's Annual Conference at the Hotel Renaissance in Barcelona.

Croce, who defeated Eric Tulla of Puerto Rico in the 2012 race to replace Sweden's Göran Petersson, is only the seventh President of the organisation since 1946.

He has vowed to "grow the sport worldwide, deliver the return of Para-sailing to the Paralympic Games and establish World Sailing as a global leader in sporting governance and sustainability".

"I would again like to express my thanks to the 45 member national associations that nominated me, and the many more that have since made clear they will be voting for me in Sunday’s election," Croce said.

"My aim is to win support from all the sailing family and to work for improved co-operation and partnership in the best interest of our great sport.

"It is this belief in unity, accompanied by a very clear vision of growth for World Sailing, that is at stake this weekend.

"I'm asking for the support of sailing colleagues on Sunday‎ because I believe I am the right choice for the next four years to help our great sport grow and prosper.

"It has been an honour to serve and I very much hope to continue building on the great things we have all achieved by working together."

Denmark's Andersen, meanwhile, has been critical of Croce's tenure so far and has accused him of a "lack of leadership".

The head of World Sailing’s Equipment Committee admitted to insidethegames that the timing of his candidature - midway through a sitting President's potential spell - was "lousy" but claimed that someone needed to right a "sinking boat".

He pointed out issues that have affected World Sailing in the past months - including Abu Dhabi withdrawing as host of this year's World Cup Final in protest at the Conference being awarded to Barcelona and not the United Arab Emirates city.

There was also controversy when Israel withdrew from December's Youth World Championships in Malaysia, claiming discrimination from organisers in the Islamic host nation.

"We need a leader who is committed to putting into place a truly open and transparent governance structure and decision-making process," said Andersen.

"This would not only help foster a close relationship, but also give a clear overview of why we make the decisions we make.

"We need a leader who is able to make responsible and accountable decisions for our sport and for our finances.

"This means being proactive in plans that affect our sport; the topic of changing the Olympic slate has left our MNAs, our coaches, and especially our athletes in a state of uncertainty about classes assignments and equipment requirements just months before qualifications.

"While a recent decision has now clarified plans for 2020, the timing of this announcement at least allows for the next World Sailing President to focus on future sporting matters, but the chaos caused within the sailing family in recent months was unnecessary.

"Moreover, we need a leader that is open and transparent about World Sailing's financials and governance procedures in the lead up to 2020 and beyond.

"This will not only help you and your future planning, but will also open World Sailing up to new commercial opportunities and partnerships, further benefiting our sport worldwide."

Henderson is seeking the President's job again at the age of 81 and is standing on an anti-kiteboarding platform.

The extreme sport which combines wakeboarding, windsurfing, surfing, paragliding and gymnastics was briefly chosen to replace windsurfing on the Olympic programme for Rio 2016 in May 2012.

It remains to be seen if Henderson's fears will be negated by the signing today of a memorandum of understanding between World Sailing, the International Kiteboarding Association (IKA) and the Global Kitesports Association (GKA).

This records a new governance structure for the discipline.

Henderson had argued that kiteboarding "fits into the new IOC confirmed sport of surfing" and claims the discipline should use the sport’s governing body, rather than World Sailing, to pursue their Olympic ambitions.