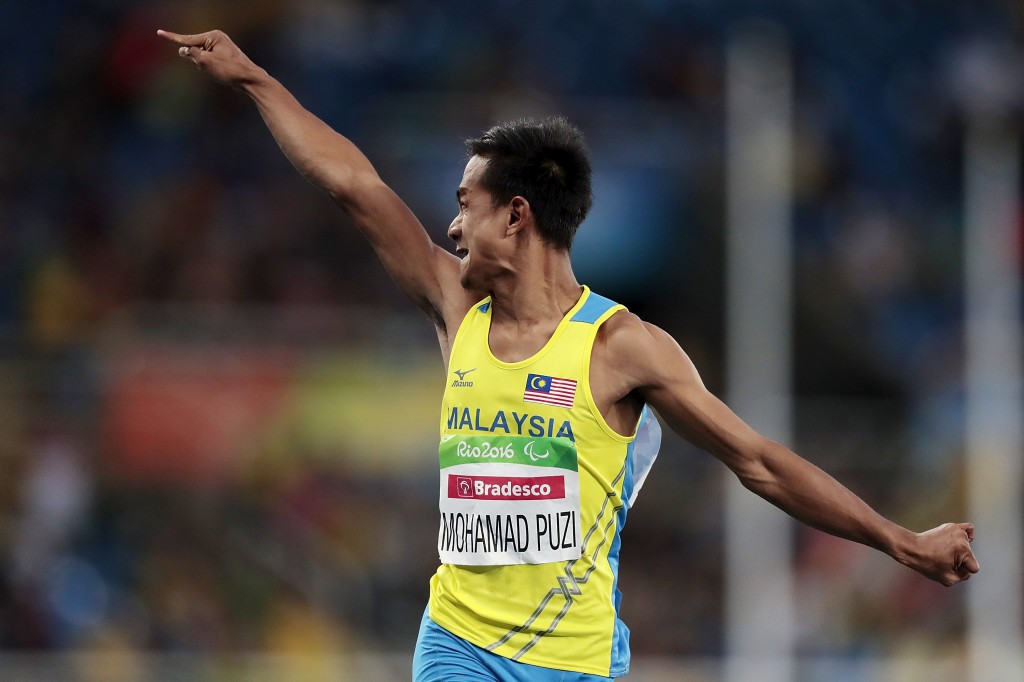 Malaysia ended their long wait for a Paralympic Games gold medal in style as they clinched two titles in just over an hour thanks to Mohamad Ridzuan Mohamad Puzi in the men's 100 metres T36 and shot put F20 competitor Muhammad Ziyad Zolkefli in front of an improved crowd at the Olympic Stadium in Rio de Janeiro.

The Asian nation are making their ninth Paralympic appearance at Rio 2016, but had not finished at the top of the podium until this evening.

Puzi produced a blistering run to break their duck at the Games, clocking a Paralympic record of 12.07sec to finish comfortably ahead of Yang Yifei of China, who had to settle for silver.

The bronze medal in the race went the way of Brazilian Rodrigo Parreira da Silva, who crossed the line in 12.54.

The performance from Puzi set the tone for what proved to be an historic night for Malaysia as an emotional Zolkefli broke the world record twice on his way to sealing gold out in the field.

The World Championships bronze medallist, who claimed long jump bronze at London 2012, threw the furthest ever recorded in the classification with his first attempt of 16.40 metres before he then managed to better that effort with his fifth, launching the shot 16.84m to secure a sublime triumph for his country.

Zolkefli, who celebrated wildly once his distance had flashed up on the screen, decided not to take up his sixth attempt as his victory had already been confirmed, with Dimitrios Senikidis of Greece some way adrift of the Malaysian's mark.

"I've made a lot of sacrifices and I've been training hard to get here," Zolkefli said.

"The result is for my family, my country and for all Malaysians.

"I sacrifice a lot.

"I train hard and I focus on my training."

"I believe in myself, stay focused and try to do the best in my life - this is the result of my life."

Hannah Cockroft justified her status as the overwhelming favourite in the women's 100m T34 as she led home a British one-two to seal her third Paralympic gold medal.

The Briton successfully defended the title she won on home soil at London 2012 with a Paralympic record of 17.42, with compatriot Kare Adenegan adding to her country's haul at Rio 2016 by taking silver.

Earlier on day three of the Rio 2016 Paralympics, Claudiney Batista dos Santos went one better than his London 2012 silver, delivering gold for the host nation in the men's discus F56.

Leonardo Diaz of Cuba rounded off the podium with bronze having managed a best effort of 43.58.

Germany's Vanessa Low broke her own world record to clinch gold in dominant fashion in the women's long jump T42.

Low's jump of 4.93 proved far too strong for the rest of the field to handle as she added the Paralympic crown to her world title, with Martina Caironi of Italy, a gold medallist at London 2012 in the 100m, picking up silver.

Malu Perez Iser of Cuba made sure she ended on a positive note as she claimed bronze.

For a full breakdown of athletics results from day three, visit our live blog here.