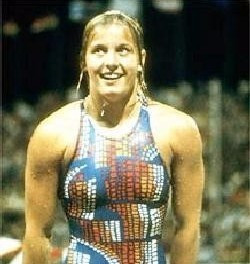 A resolution has been passed by the California Senate which calls on the International Olympic Committee and the International Swimming Federation (FINA) to rescind medals won by East German athletes who were part of a notorious state-sponsored doping programme.

The motion, entitled “Senate Resolution 88”, urges the relevant governing bodies, such as the IOC, FINA and USA Swimming, to recognise those who were denied their chance of glory by doped East Germans.

This includes Shirley Babashoff, winner of four Olympic silver medals at Montreal 1976, finishing behind an athlete from the now defunct country each time.

Babashoff did win an Olympic gold medal at the event in the Canadian city in the 4x100 metres freestyle as the United States successfully defended the Olympic crown they clinched at Munich 1972.

During a 20-year period in the 1970s and 1980s prior to the fall of the Berlin Wall in 1989, the German Democratic Republic (GDR) conducted a widespread state-supported doping regime, known as State Plan 14.25.

It is estimated that up to 9,000 athletes were part of the programme, often being given banned drugs without their knowledge.

It was overseen by the Ministry for State Security, known as the Stasi.

The programme yielded spectacular results as East Germany, a relatively small country at the time, enjoyed a rapid growth in success, particularly at Olympic level.

They went from winning 25 medals at Mexico City in 1968 to claiming 90 at Montreal 1976, 40 of which were gold, finishing second behind the Soviet Union.

East German athletes, considered the face of the Communist regime, then went on to win 37 Olympic gold medals in a total haul of 102 at Seoul 1988, the last Games they competed in before the collapse of the Berlin Wall the following year and the reunification of Germany.

It, however, had adverse effects on the health of some of the athletes, many of whom were unaware of what was going on.

Andreas Krieger, winner of the gold medal in the women's shot put at the European Championships in Stuttgart in 1986 as Heidi Krieger, is one of the most notable examples.

Earlier this year, the German Government agreed to launch a second wave of compensation to athletes affected by the scandal.

Around 2,000 athletes today struggle with illnesses and various other medical conditions, such as cancer, heart tumours, infertility and depression, as a result of their participation in the doping programme.