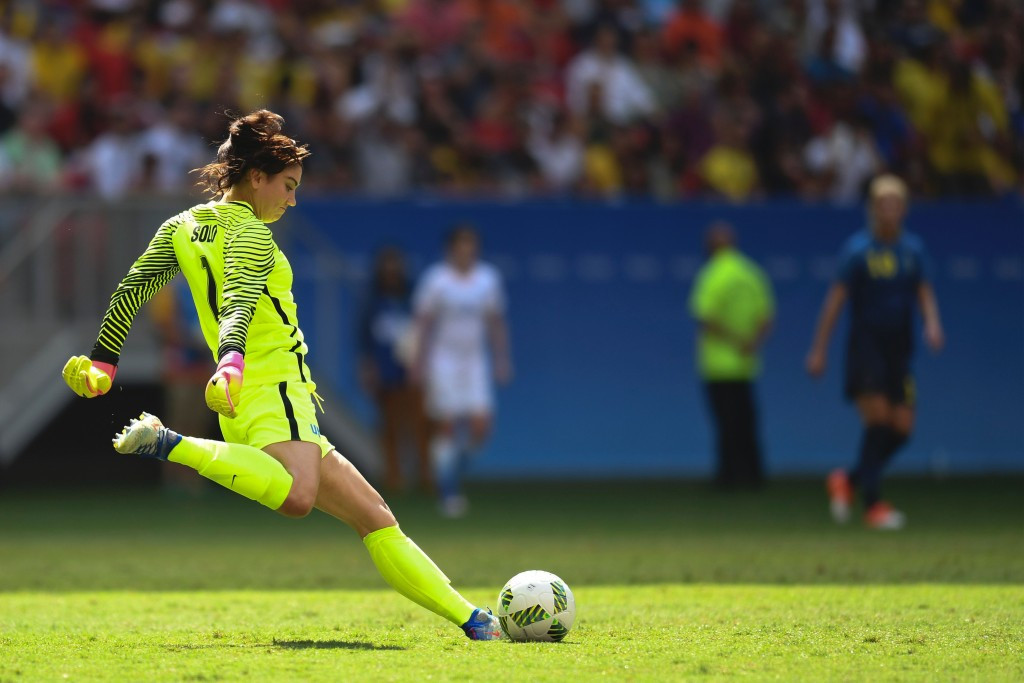 United States women’s goalkeeper Hope Solo has been banned from representing her country for six months for describing the Swedish team as a “bunch of cowards” during the Olympic tournament at Rio 2016.

U.S Soccer President Sunil Gulati, who is a member of FIFA’s ruling Council, described Solo’s comments as “unacceptable” and claimed they did “not meet the standard of conduct we require from our national team players”.

“Taking into consideration the past incidents involving Hope, as well as the private conversations we’ve had requiring her to conduct herself in a manner befitting a U.S National Team member, U.S Soccer determined this is the appropriate disciplinary action,” Gulati added.

Solo gave the quotes in a post-match interview after her American side had suffered a shock quarter-final exit at the hands of Sweden, ending their chances of a fourth straight Olympic gold medal.

The Swedes, who were only in the tournament because Britain declined to take their spot in the competition, claimed a surprise 4-3 victory on penalties after their clash with the defending champions had finished 1-1 after extra time.

Her comments at Rio 2016 sparked outrage, with Sweden’s coach Pia Sundhage, who used to be in charge of the American side, declaring in the aftermath that it was “okay to be a coward if you win”.

Sweden went on to reach the final, where they were beaten 2-1 by Germany.

The decision of U.S Soccer means Solo will be suspended until February 2017.

The 35-year-old is guaranteed to miss matches against Thailand and The Netherlands next month but could also be absent for further games as U.S Soccer have not yet revealed their exact fixture list.

Solo, who has been involved in a number of controversies in the past and served a 30-day suspension last February, admitted she was “saddened” by the decision of the National Federation.

“I could not be the player I am without being the person I am, even when I haven’t made the best choices or said the right things,” she wrote on her Facebook page.

“My entire career, I have only wanted the best for this team, for the players and for the women’s game and I will continue to pursue these causes with the same unrelenting passion with which I play the game.”

Solo was one of the leading voices in the American team who protested against U.S Soccer over a lack of equal play between them and their male equivalents.

The women’s side even threatened to boycott the Rio 2016 Olympic Games, which would have provided a huge embarrassment to the nation and the National Federation, as a result of the row.

She was also the subject of misdemeanour allegations following claims she assaulted her sister and 17-year-old nephew in 2014 when intoxicated.