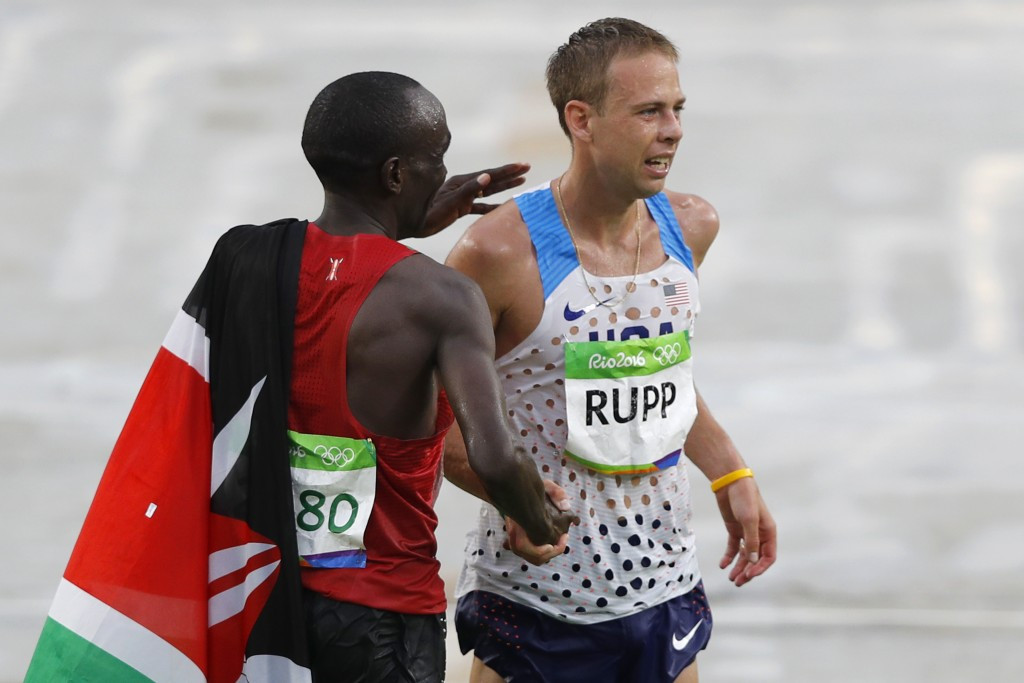 Kenya’s Eliud Kipchoge demonstrated once again here that he is the foremost marathon runner of the moment as he remorselessly rid himself of all opposition to claim gold ahead of the two last men to have broken under his pace, Fayisa Lelisa of Ethiopia and Galen Rupp of the United States, who took silver and bronze respectively.

The times were not fast - Kipchoge, the second Kenyan Olympic winner after Sammy Wanjiru in 2008 - recorded 2hr 08min 44sec, with Lelisa clocking 2:09.54 and Rupp – London 2012 10,000m silver medallist behind training partner Mo Farah - registering a personal best of 2:10.05 having made his marathon debut at last month’s US Trials.

With victories in seven of his eight marathons, including the London win in 2:03.05, which tops the 2016 lists, Kipchoge - the 5,000m silver medallist at the Beijing 2008 Games - had all the credentials for victory as he came to this course in a field of 155 starters, making this the largest men's marathon in Olympic history.

Rainy, and then damp and cool conditions made for some unusual problems – a lot of runners ended up stopping to tie up their shoelaces in the early stages – but it was merciful for the field after initial forecasts of hot and humid weather.

The real racing began after 30 of the 42.1km, as Kipchoge and his Kenyan team-mates Stanley Biwott, the London 2016 runner-up, and Wesley Korir took charge of the race.

“It was a championship and it was a bit slow so I decided to take over,” said Kipchoge, who completed the marathon double here for Kenya following the women’s event victory for Jemima Sumgong.

“Maybe it was the rain, maybe not.

“Everyone wants a medal - I was coming here for gold.”

That much was obvious as Kipchoge ruthlessly set about ridding himself of all opposition.

By 33km there were just three men running in a line - Kipchoge, Rupp and Lelisa.

Rupp was the first to drop off, after 35km, and shortly afterwards the decisive moment of the race occurred when Kipchoge moved to the left and appeared to be ushering the grimacing Lelisa through to take a turn in the lead.

When the invitation was politely declined, the Kenyan had the information he needed and took off for gold - it was brutal stuff.

In the space of a couple of minutes, a gap of 40 metres had opened up and the gold was destined for Kenya.

Rupp looked as if he was struggling, but he had a minute in hand over his nearest challenger, Eritrea’s Ghirmay Ghebreslassie, who finished fourth in 2:11.04.

“I was emotionally drained after the 10k,” said Rupp, having finished fifth as his friend Farah retained his title.

“But I got it out of the system and decided to have an attacking race.

“Maybe this is my best event."