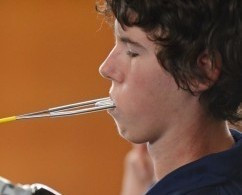 Daniel Michel is set to become the first Australian to compete in boccia at the Paralympic Games since Sydney 2000 after being selected for Rio 2016.

The 21-year-old from Sydney earned a place in Brazil after finishing sixth in the BC3 category at this year's World Individual Championships in Beijing.

“To have a boccia athlete like Dan earn the right to represent Australia at the Paralympics for the first time since Sydney 2000 is a testament to the hard work the APC and our partners have put into developing the national programme over the past four years."

“Daniel has shown immense commitment and determination in reaching this point, and has proved himself to be a true leader for up-and-coming athletes with more severe disabilities," said McLoughlin.

"He has been training exceptionally hard, and I’m looking forward to not only seeing him put this truly unique Paralympic sport into the spotlight in Australia, but for this to ensure a brighter future for the sport."

Australia were represented by three men and three women at Sydney 2000 but none of them won a medal.

It feels like a really good reward for the effort I’ve put in this qualification period.

“Being the first person to represent Australia at a Paralympic Games since Sydney 2000 is a massive honour.

"I’m really proud to have that title and to be doing that for my country.

“I’m hoping it’s going to have a huge impact on the sport and on the reputation and perception of people with severe disabilities.

"The overriding public perception surrounding severe disabilities is that people living with these disabilities aren’t really capable of succeeding in a sporting atmosphere.

"There’s an emphasis on being successful through academia, but sport is never really promoted as an avenue through which people with severe physical disabilities can achieve enjoyment and also success.

“I think when people see boccia at the Paralympics and see all these athletes competing with severe disabilities; it’s going to really widen their ideas of what people with disabilities are capable of doing. It’s going to help shift those perceptions.

“I think it’s going to go a long way in opening the eyes of people living with disabilities, and it’s going to show them the opportunities they have to play and compete in a sport."

The winner of the Paralympic gold medal in the BC3 class at London 2012 was South Korea's Ye-lin Choi, who beat team-mate Ho-Won Jeong in the final.