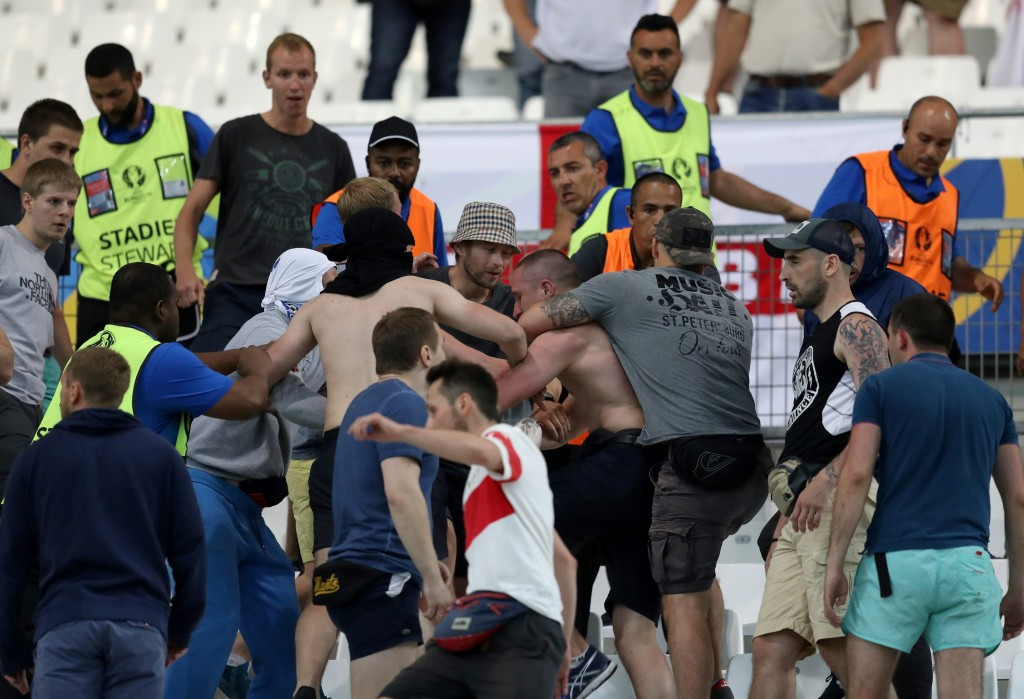 European football’s governing body UEFA have acknowledged that there were “segregation issues” at yesterday’s 2016 European Championship Group B match between England and Russia, but have expressed their “utter disgust” at violent clashes between fans.

The pre-match build-up to the encounter had been marred by three-days of clashes in Marseille, involving supporters from both nations, with French police using water cannons and tear gas in a bid to halt the violence.

One Briton was reportedly resuscitated by officers and was deemed to have been in a critical condition.

Following last night’s 1-1 draw at the Stade Velodrome, where Russia scored a last minute equaliser through Vasili Berezutski’s looping header, there were further disturbances in the crowd.

UEFA have confirmed that England will face no action, with incidents within the ground widely believed to have been instigated by Russian supporters.

The body have charged the Russian Football Union, whose President is Russian Sports Minister Vitaly Mutko, with crowd disturbances, racist behaviour and setting off of fireworks.

“UEFA expresses its utter disgust for the violent clashes that occurred in the city centre of Marseille, and its serious concern for the incidents at the end of the match inside Stade Velodrome,” a UEFA statement read.

“This kind of behaviour is totally unacceptable and has no place in football.

“UEFA acknowledges that there were segregation issues at Stade Velodrome and will implement corrective measures to strengthen the deployment of security personnel at stadiums, in close collaboration with local authorities.”

A decision on the case will be made on June 14.

The International Centre for Sport Security (ICSS) has called for an urgent review into match security and threat and risk assessments for each match and host city.

"Spectators located in the Russian supporter areas were able to overcome barriers and access the English supporters’ section," an ICSS statement said.

"This demonstrates that preventative measures in place to segregate the fans were inadequate. It appears there was a breakdown in general structure, response and crowd management.

"As a matter of process, an urgent review of the operating procedures for crowd management and spectator segregation is required to ensure that best practice operations, including those from previous tournaments, are in place."

During qualifying for the tournament, UEFA awarded Serbia a 3-0 walkover victory but deducted the nation three points after Albania forfeited their highly-charged clash after crowd trouble and a brawl on the pitch.

This came after a drone with a pro-Albanian banner was flown into the Partizan Stadium in Belgrade.

The Court of Arbitration for Sport (CAS) overruled the decision and gave Albania a 3-0 win, which helped them qualify for the tournament, with both teams receiving fines.

Serbia were forced to play their next home qualifiers behind closed doors.

The violent clashes will raise further fears over the security of the Championships, with the start of the tournament having been dominated by concerns following November's terrorist attacks in Paris.

The attacks left 130 people dead in the French capital and included explosions at the Stade de France, where the final will be played.

There were also suggestions that matches could be played behind closed doors because of the terrorism threat, after attacks in Brussels in March left 34 people dead.