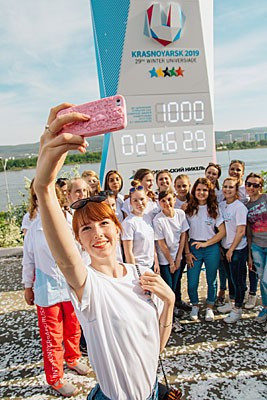 The build-up to the 2019 Winter Universiade in Krasnoyarsk has officially got underway with the unveiling of the countdown clock for the event at a special ceremony in the Russian city.

A series of activities across Krasnoyarsk were held to mark the occasion, with the Opening Ceremony of the event less than 1,000 days away.

Viktor Tomenko, the Chairman of the Krasnoyarsk Territory Government, warned the audience in attendance that the time would “fly by” but remains confident the city will stage a successful event despite the fact a lot of the construction work still needs to take place.

“The time span of 1,000 days seems like a lot of time, however, when you look at the scope of the tasks, which are yet to be taken care of in Krasnoyarsk, namely, construction of the sports venues, improvement and development of the city infrastructure, the time will fly by only too quickly, I am sure of it,” he said.

“Every new day brings us closer to the start of the 2019 Winter Universiade.

“All heads of federal and territorial agencies keep a close eye on the time-frame and schedule of preparation for this major event in the world of university sports.”

The event began with the opening of the Expo-Pavilion of the 2019 Winter Universiade as part of a big sports celebration on Tatyshev Island, before the clock itself was revealed.

It was made and installed with the support of Norilsk Nickel Mining and Metallurgical Company, the General Partner for the event in three years’ time, and is decorated in the colours of the Krasnoyarsk 2019 logo.

School children who have taken part in the “Lessons of the 2019 Winter Universiade” scheme, which aims to teach youngsters in the region about the event, were given a tour of some of the venues.

A celebratory concert was then held at the Big Concert Hall, entitled “Extreme Classics” and which featured music from the Krasnoyarsk Academic Symphony Orchestra, to bring the event to a close.

The day’s events were attended by a number of dignitaries, including Deputy Russian Sports Minister Natalia Parshikova, who said the Winter Universiade should be the platform for Krasnoyarsk potentially staging other major events, such as the Youth Olympic Games.

“The preparation for the Winter Universiade gives Krasnoyarsk an opportunity to build the venues and infrastructure, which will allow your city to host other major sporting events in the future,” Parshikova said.

“Why not dream about hosting, for example, the Youth Olympic Games here in Krasnoyarsk?

“Today’s work is investment into the future.

“Everything is moving ahead just as it was during preparation for the Universiade in Kazan, for the Olympic Games in Sochi, for the FIFA World Cup in different cities - nothing new, the same problems, and the same questions.

“Krasnoyarsk city and Territory are handling it just fine.”