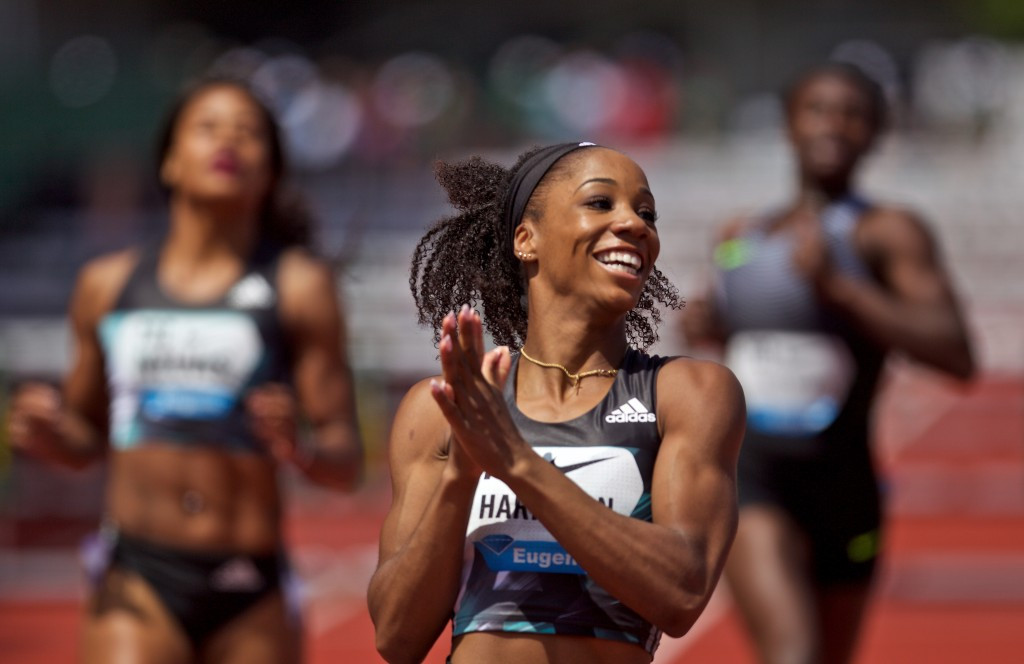 Twenty-three-year-old Kendra Harrison became the second fastest 100 metre hurdler in a time of 12.24sec and 19-year-old Ruth Jebet came within less than a second of the 3000m steeplechase world record of 8:58.81 set by Russia’s Gulnara Galkina at the Beijing Olympics.

Jebet, a naturalised Kenyan now running for Bahrain, was pushed to the line by Kenya’s world champion Hyvin Kiyeng Jepkemoi, finishing in a time of 8:59.97 to go second on the all-time list.

Jepkemoi's 9:00.01 places her third in the all-time rankings.

Home runner Emma Coburn was rewarded for chasing the two Africans home by clocking a national record of 9:10.76.

Harrison’s time, also a US record, has only been bettered by one woman - Bulgaria’s world record holder Yordanka Donkova.

It is 28 years since Donkova set her mark of 12.21 in Stara Zagora, but the 23-year-old Harrison - who already had the two fastest times so far this season in 12.36 and 12.42 - now looks capable of eclipsing that longstanding record.

The strength in depth of this event in the States was evident from the fact that home runners filled the first five places, with 2013 world champion Brianne Rollins second in 12.53 and Jasmin Stowers third in 12.55.

World 200m champion Dafne Schippers had to give best to home sprinter Tori Bowie as she finished second in 22.11, with the US former long jumper clocking 21.99.

The men’s 400m produced, as expected, another close race between perennial rivals Kirani James of Grenada and LaShawn Merritt of the US, with James, the London 2012 champion, earning the honours over the world silver medallist thanks to a time of 44.22, 0.17sec faster than his American rival.

Home runner Sanya Richards-Ross plans to defend her Olympic 400m title this summer in what will be her final season.

The 31-year-old had an unhappy final appearance at Hayward Field as she finished seventh and last in 52.16 as Shaunae Miller of The Bahamas took the honours in 50.15.

Olympic pole vault champion and world record holder Renaud Lavillenie reasserted his status over the two young guns who have challenged him in the last year.

While his best effort of 5.81m was matched by 22-year-old Canadian Shawnacy Barber who took the outdoor world title in Beijing last summer, the 29-year-old Frenchman won on countback, with 23-year-old US athlete Sam Kendricks - who beat him in the Shanghai Diamond League meeting earlier this month - third with a best of 5.71.

Jamaica’s 22-year-old high hurdler Omar McLeod, who won the world indoor title in nearby Portland two months ago, continues to be the pacesetter over the 110m hurdles this season.

He won in 13.06, well clear of home athlete David Oliver, the 2013 world champion, who clocked 13.38 ahead of fellow Americans Jeff Porter, in 13.48, and Olympic champion Aries Merritt, still seeking top form after last year’s kidney transplant, who was fifth in 13.51.

The obvious concerns of Jamaica’s world and Olympic 100m champion Shelly-Ann Fraser-Pryce ahead of her first major test following a toe injury that has disrupted her early season programme proved entirely justified as she finished eighth and last, clocking 11.18, in a race won by US sprinter English Gardner in 10.81.

Another home runner, Tianna Bartoletta, was second in 10.94, with third place going to Murielle Ahoure of Ivory Coast in 11.01.

Asbel Kiprop, Kenya’s world and former Olympic 1500m champion, had to push to the line to hold off the challenge of Abdelaati Iguider in the Bill Bowerman Mile, squeezing home by 3:51.54 to the Moroccan’s 3:51.96.

Another home runner, Boris Berian, clocked 1:44.20 for an unexpected 800m win over a field that included Ethiopia’s former world champion Mohammed Aman, who was third in 1:44.70, 2015 world bronze medallist Amel Tuka of Bosnia and Hercegovina, sixth in 1:45.90, and Poland’s world silver medallist Adam Kszczot, fourth in 1:44.99.

Christian Taylor produced a final effort of 17.76m to win by 20cm from fellow American Will Claye in the men's triple jump.

Ihab Abdelrahman of Egypt won the men’s javelin with an effort of 87.37m to finish ahead of Kenya’s world champion Julius Yego, whose 84.68m kept him ahead of Thomas Rohler of Germany, whose best was 82.53m.