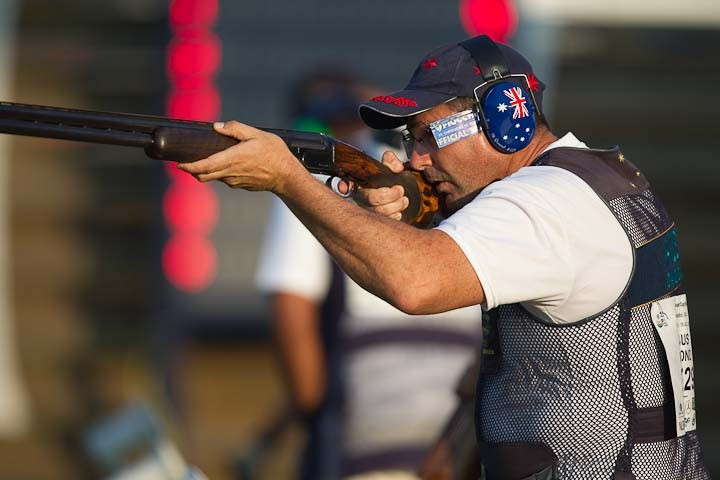 Veteran Australian shooter Michael Diamond faces missing the Rio 2016 Olympic Games after being arrested under suspicion of drink driving and possession of a shotgun.

The 44-year-old two-time Olympic champion allegedly provided a blood-alcohol reading more than three times over the legal limit after being arrested in Newcastle, New South Wales, for reportedly possessing the shotgun and 150 rounds of ammunition in his car.

He reportedly refused to undergo a road-side breath test before providing one in the police station.

This followed reports of a domestic dispute with his brother, who has taken out an apprehended violence order against him.

He has been charged with high-range drink driving and weapons offences and faces a court appearance on June 7.

His gun license is now suspended.

"Shooting Australia is aware that certain charges have been reported today in relation to Michael Diamond," the body said in a statement.

"We can confirm that Shooting Australia is working closely with Michael to support him and to ensure that his welfare is protected.

"We are also communicating regularly with the Australian Olympic Committee and our other stakeholders, and we will continue to do so.

Athlete nominations to the Australian Olympic Committee, and the appeal involving Michael Diamond, will proceed according to the relevant policies."

Diamond, who made his Olympic debut by finishing 11th in the mixed trap at Barcelona 1992, won trap gold medals at Atlanta 1996 and on his home range at Sydney 2000.

The shotgun star has also won five Commonwealth Games medals and had been hoping to match swimmer Dawn Fraser and become the second Australian to win three Olympic gold medals in the same event in Rio.

But his place was already in doubt after 16-year-old rival Mitchell Iles appealed to the Court of Arbitration (CAS) on the grounds that he had shot the qualification mark of 121 from 125 targets more times than Diamond.

Diamond, currently ranked 28th in the world, achieved his standards in official International Shooting Sport Federation events while Iles did so in domestic and junior level ones.

He is no stranger to controversy, having also become embroiled in a spat this year with team-mate Russell Mark.

Mark responded by claiming that if the pair ever roomed together again “they’d want to disarm us”.