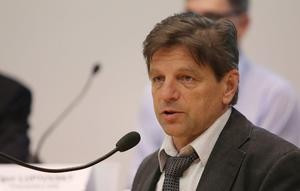 Tomáš Fusko has been elected President of the Slovak Biathlon Association after seeing off the challenge of two brothers.

Fusko was confirmed in the role following an Extraordinary General Assembly which was held in Banska Bystrica.

He had already been serving as interim President - a role he took on in October when Ján Hyža was recalled.

Brothers Dusan and Radovan Šimočko had opposed Fusko's election to the role permanently, with Radovan dropping out prior to the vote in an attempt to rally support behind his sibling.

Fusko eventually beat his rival by 52 votes to 41.

"Since being appointed to the Presidency in October, I have had half a year to try out the job and gain some confidence," he said.

"My candidacy came from the people."

Fusko added: "They saw how we can work together organising competitions and the team management.

"The people suggested that I run and I accepted because I am not afraid of challenges.

"I want to cooperate with the other candidates; it is not whether I won or they lost but Slovak Biathlon has a new President and we can move forward.

"We now have to consider how to set up a modern sports organisation.

"There are many tasks ahead."

Fusko, a former biathlete himself, has previously worked as a coach and was a technical delegate for the International Biathlon Union.