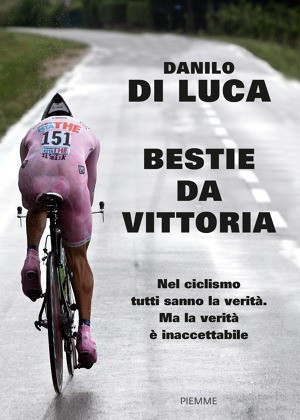 Disgraced Italian Danilo Di Luca has claimed cheating was essential for victory during his time on the bike in an explosive new autobiography due to be released tomorrow.

The 40-year-old was banned from the sport for life back in 2013 for a third doping offence after he tested positive for erythropoietin (EPO) before the Giro D’Italia.

Di Luca, winner of the Giro in 2007, as well as the prestigious Liège-Bastogne-Liège in the same year, had previously been given a two-year ban, which was then reduced to nine months.

He was also implicated in the notorious "Oil for Drugs" case against doctor Carlo Santuccione and a number of accomplices, who were accused of administering drugs to professional and amateur cyclists.

Santuccione was banned for life by the Italian National Olympic Committee (CONI) in 2007, while Di Luca served a three-month suspension for his role in the affair.

In the book, entitled Bestie di Vittoria – “Beasts made for victory” - and written with Alessandra Carati, Di Luca goes into extensive detail about his prolonged doping and claims he “did what had to do to finish first”.

“If I hadn't doped, I would never have won," Di Luca writes.

"Doping improves your performance between 5 and 7 per cent, and maybe 10 to 12 per cent when you are in a peak shape.

"Doping isn't addictive but it's an instrument of power: whoever wins attracts the money; for themselves, the team and the sponsors."

Di Luca also admitted his own negligence caused the second positive for EPO in an out-of-competition test mere days before the start of the Giro D’Italia in 2013.

The opening chapter of the book is written as reflection from two days after he was caught.

“I lived my trade just as all the most aggressive riders do,” Di Luca writes.

“Cycling is no longer the sport that I once loved.

"I was reserved the honour of being the first to be caught that way.

“Now the word will go around and the others will change the way they do things.

“I've no regrets at all.

“I lied and I cheated; I did what had to do to finish first.

"But that's not the point, the point is that I didn't dilute my system in time

“Two days ago I was about to ride the final three stages of the Giro d'Italia, then I was told about my positive test.

“I don't need to wait for the official sentence, I know that my career is over.”