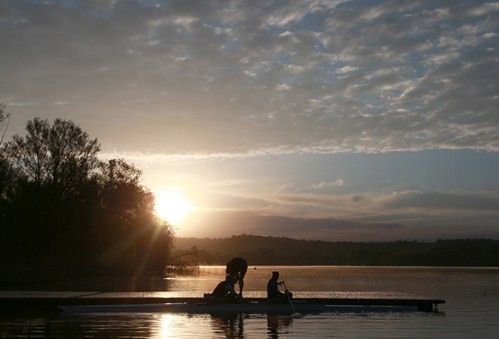 Two-time world champions Valent and Martin Sinković impressed on the opening day of the World Rowing Cup series in Varese to advance to the men's double sculls final on Sunday (April 17).

The Croatian brothers were pressured by Norwegian and Polish crews during their heat, but eventually emerged as winners in a time of 6min 11.560sec to claim the automatic place in the final.

They will be joined by Switzerland’s Nico Stahlberg and Roman Roeoesli, who saw off competition from Cuba and the home favourites Francesco Fossi and Romano Battisti of Italy to win their heat in 6:12.050.

Nine nations will be forced to compete in tomorrow’s repecharge to try to secure their place in the final.

In the women’s single sculls, Olympic champion Mirka Knapková of the Czech Republic was unable to hold off Ireland’s Sanita Purspure in her heat.

Purspure was able to finish 1.81 seconds ahead of her rival to win her heat in a time of 7:34.320, with Denmark’s Fie Udby Erichsen, Canada's Carling Zeeman and Belarus’ Ekaterina Karsten triumphing in their races to join the Irish rower in the semi-finals.

Having missed out on top spot in her heat, Knapková was forced to compete in the repecharge but failed to book her place in the semi-finals of the competition.

Britain’s Nathaniel Reilly-O’Donnell and Matthew Tarrant, who took men's coxed pair gold at last year’s World Championships, delivered an impressive display in their heat to advance to the semi-finals.

The duo clocked 6:33.020 to win their heat ahead of Serbia’s Nenad Bedik and Milos Vasic, with the World Championship bronze medallists also advancing having finished in 6:37.100.

Roel Braas and Mitchel Steenman of The Netherlands’ won their heat in 6:32.960, while Spain’s Alexander Sigurbjonsson Benet and Pau Vela Maggi crossed in 6:34.030 to progress.

They completed the distance in a time of 5:54.020 to end two seconds adrift of the United States quartet, with both crews reaching the final of Sunday.

Canada and The Netherlands’ finished in the top two positions in their heat to also progress.