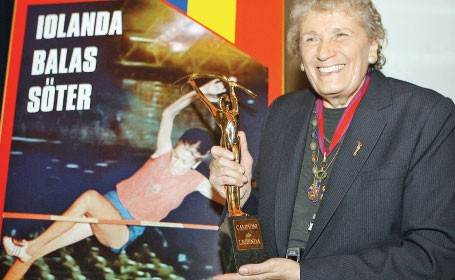 Romania's double Olympic high jump gold medallist Iolanda Balas has died at the age of 79, it has been announced by the International Association of Athletics Federations here today.

She passed away in the Elias Hospital in Bucharest yesterday following gastric complications.

Along with her two Olympic titles and 14 world records, Balas was unbeaten for almost 11 years, notching up 140 consecutive victories.

Born in Timisoara in 1936, Balas got into athletics through her caretaker Luisa Ernst, a former high jumper.

She started competing in her early teens and soon developed her own variation of the scissor technique.

She went on to finish fifth at the Olympic Games later in the year in Melbourne.

The following year Balas started a winning streak of 140 competitions that was to last just over a decade.

In 1958, she cleared 1.83m and so became the first woman to clear the psychologically and historically significant barrier of six feet.

That summer she took what would be the first of two European titles during her career.

Balas triumphed at the 1960 Olympics in Rome, going over an Olympic record of 1.85m, just one centimetre short of her then world record.

Her nearest rivals in Rome could only clear 1.71m, giving Balas the greatest winning margin in a senior global championships high jump contest.

In 1961, Balas improved her world record on four more occasions, culminating with a clearance of 1.91m in Sofia to win the World Universiade title.

Her mark remained unbeaten for 10 years until Austria's Ilona Gusenbauer broke it by one centimetre.

US magazine Track and Field News voted Balas as the best female high jumper of the 20th century in 2000.

Balas retired in 1967 and married her former coach Ian Soter.

She later taught physical education in Bucharest and was President of the Romanian Athletics Federation from 1988 to 2005.

In 2012, she was among the first inductees into the IAAF Hall of Fame.