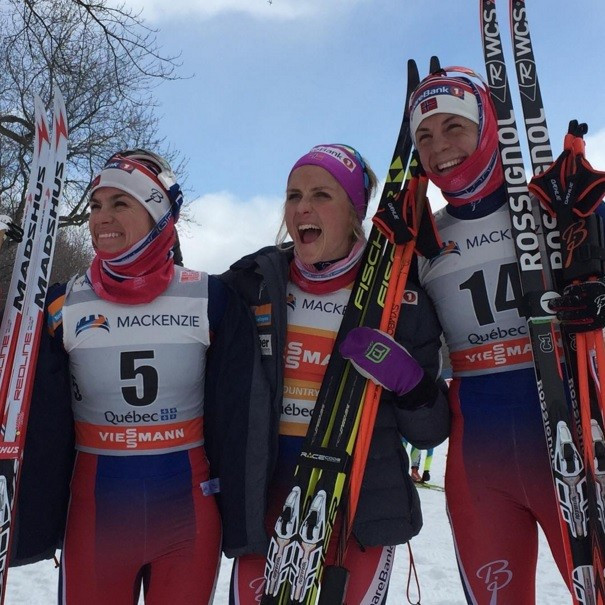 Therese Johaug claimed her 16th victory of the season as she led home a Norwegian clean sweep in the women’s 10.5 kilometres mass start classic at the International Ski Federation (FIS) Cross-Country World Cup event in Montreal.

Johaug, a seven-time world champion, is now just one away from equalling compatriot Marit Bjørgen for the most wins in a single campaign as she powered to a dominant success in a race is part of the Ski Tour Canada.

The 27-year-old, a member of the 4x5km Olympic gold medal winning relay team at Vancouver 2010, crossed the line in 30min 05.6sec, comfortably ahead of nearest challenger Heidi Weng.

Astrid Uhrenholdt Jacobsen completed the Norwegian monopoly of the podium as she came through to take the bronze medal in a time of 31:15.4.

The result sees Johaug extend her lead at the top of the overall standings as she now has 2,081 points, with team-mate Ingvild Flugstad Østberg second on 1,850.

Weng occupies third place with a score of 1,643 points.

“I started from the fourth row as bib 27,” Johaug said.

“There were many girls ahead of me - it was not easy to move to the front but I am really happy I could go to the lead.

“My shape was great and I felt I could push hard the whole way.

“I wanted to win as many seconds as possible ahead of the sprint in Québec.”

The Norwegian dominance in Montreal continued when Emil Iversen secured his first-ever distance victory at a World Cup event by winning the men’s race, held over 17.5km.

Iversen completed the course in 45:05.4 to edge compatriot and two-time Olympic champion Petter Northug, who was 5.3 seconds adrift.

Russian Sergey Ustiugov, the winner in yesterday’s sprint competition, had to settle for the bronze medal.

Finn Haagen Krogh, also of Norway, is his closest rival on 1,320.

“My goal before the Ski Tour Canada was to have a good start,” Iversen said.

“Now I have to take it stage by stage and we see what happens.”

The Ski Tour Canada is due to continue with sprint races for men and women in Québec City on Friday (March 4).