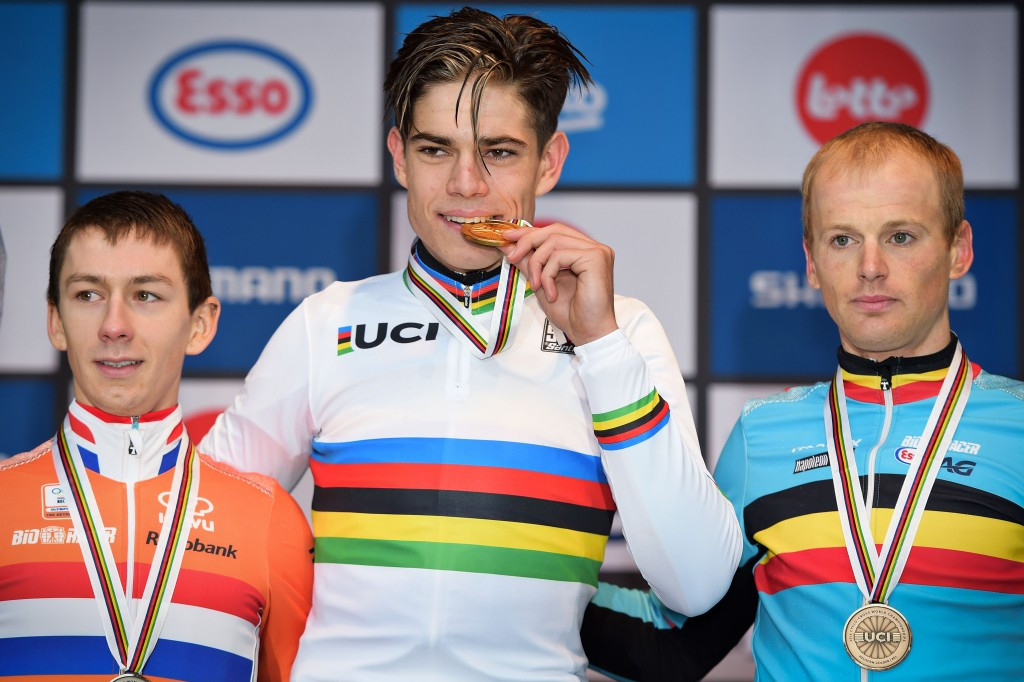 Having seen Sanne Cant finish third in yesterday’s women’s race, the pressure to deliver home success had switched to Van Aert, although the Belgian was expected to face a strong Dutch challenge.

The local rider attacked the from the 61-strong field during the opening lap of the circuit, with The Netherlands’ Lars van der Haar and defending champion Mathieu van der Poel joining the 21-year-old.

The trio were quickly joined by a further seven riders, despite the attack, with Van Aert and Van der Poe suffering a major setback after the pair collided when negotiating a corner on the fourth lap.

Van der Haar launched another attack to go solo but was unable to sustain the effort as Van Aert clawed his way back into contention and caught his rival on the final lap of the circuit.

After accelerating past the Dutchman on a climb, Van Aert moved further clear in the closing stages to secure his first world title in a time of 1 hour 05min 52sec on a course of approximately 25 kilometres.

Eli Iserbyt secured further success for the host country in the men’s under-23 race, finishing in 51:18.

The Belgian finished just one second clear of the Czech Republic’s Adam Toupalik, while team-mate Quinten Hermans completed the podium in 51:23.

The Netherlands’ Jens Dekker completed the junior course in 43:05 to win the gold medal ahead of France’s Mickael Crispin and Thomas Bonnet, who clocked 43:40 and 44:05 respectively.

Yesterday the UCI confirmed they had detained a bike following’s women's under-23 race, with an investigation regarding technological fraud, also known as "mechanical doping", being carried out.

Belgian rider Femke Van den Driessche, to whom the bike belonged to, has denied using a motor to speed up progress, in what would become the first case of its kind should it be confirmed.

“I didn’t know anything about it, I don’t know how that bike got there,” the 19-year-old told Sporza.

“I was surprised to see that bike standing there, it’s not my bike, there’s been a mistake.

“There was nothing in the bike that I used at the start of the race, I train hard for it too, you know.

“Then it’s no fun to be accused like this.”

With mechanical doping seen as a modern challenge for the UCI, who have a clause against the practice in its rules, the world governing body’s President Brian Cookson sent a warning to cyclists who might consider an advancement to boost their performance.

“We want the minority who may consider cheating to know that, increasingly there is no place to hide, and sooner or later they will pay for the damage they’re causing to our sport.”