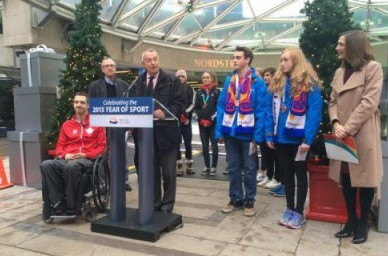 The biennial event is dueto take place at the Richmond Olympic Oval from June 24 to 26.

It is considered the third most prestigious wheelchair rugby event in the world after the Paralympic Games and World Championships.

Support was pledged by the Provincial Government's Minister for Community, Sport and Cultural Development Peter Fassbender at an event celebrating the Canadian year of sport at Robson Square.

He spoke alongside Canadian player Byron Green, who talked about winning gold at the Toronto 2015 Pan American Games and his expectations ahead of a season set to culminate with the Paralympic Games in Rio de Janeiro.

Canada are the world's number one ranked side but were beaten 62-54 in the final of the last Canada Cup to Australia in 2014 in front of a sellout crowd.

Australia also beat Canada 67-56 in the final of the 2014 World Championships in Odense, Denmark.

They will expect to renew their rivalry with the team nicknamed the "Steelers" next year.

Canada have never won a Paralympic gold medal in the sport since wheelchair rugby was first included at Atlanta 1996, losing the London 2012 final 66-51 to Australia.