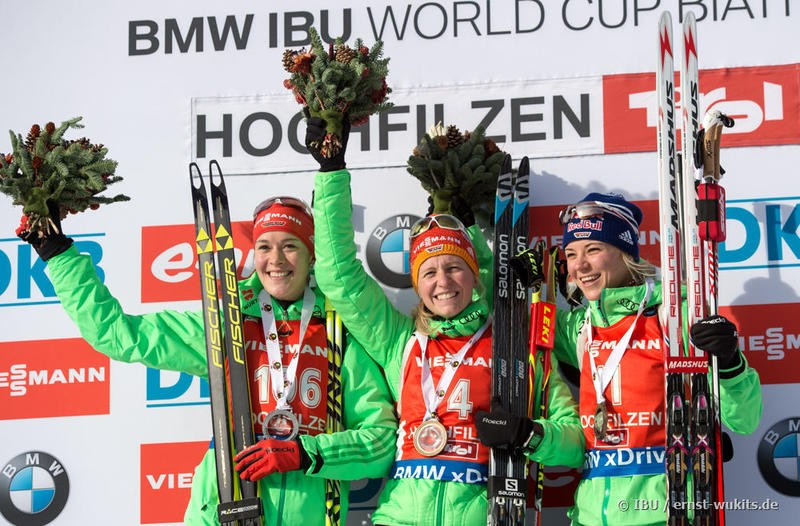 Hildebrand, a member of the German quartet which won gold at the 2015 World Championships in the 4x6km relay in Kontiolahti, Finland, shot clean on her way to clocking a time of 20min 04.1sec.

Frenchwoman Anaïs Bescond, who earned two silvers at this year’s World Championships, narrowly missed out on a medal as she came fourth.

Gabriela Soukalova of the Czech Republic is the current overall World Cup leader on 174 points, with Dorin Habert second and the success for Hildebrand elevated her into third place.

“It was a big surprise,” Hildebrand said.

“That I am here is really unbelievable; good shooting is always the key.

“My goal now is a second World Cup victory.”

The competitors were greeted with near-perfect conditions and Marie Dorin Habert, 7.5km pursuit world champion, was the beneficiary as she opened up an early lead thanks to a clean prone stage.

Hildebrand was just a second adrift, while Gössner also shot clean but was a further six seconds behind.

The German then stamped her authority on proceedings as she was one of only a handful of women to come through the standing stage unscathed.

The likes of Gössner and Soukalova remained in contention but couldn’t quite usurp Hildebrand in pole position.

Gössner, whose last podium finish came in the 2012 to 2013 season, was able to keep on her teammate’s tail with a brisk display on the skis, while Czech Lucie Charvátová emerged as a surprise challenger for a medal and was just 1.1 second behind the leading pack.

Hildebrand then began to pull away and eventually established an insurmounatable lead, with Hammerschmidt coming through to take silver in front of Gössner.

In the men's 10km event, Simon Schempp of Germany recovered from a disappointing outing in Östersund, Sweden last week, where he could only manage 77th place, by edging Frenchman Martin Fourcade to gold.

The German finished the course in a time of 23:52.3, with Fourcade 9.9 seconds behind in second.

Fourcade heads the overall leaderboard ahead of Ole Einar Bjørndalen on 194 points.