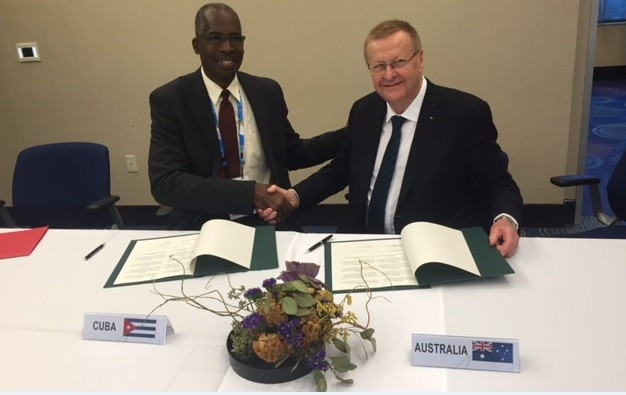 The historic deal also aims to promote cooperation globally in the fight against doping in sport.

It was signed by AOC President John Coates and COC secretary general Ruperto Herrera Tabio, who are both here attending the Association of National Olympic Committees General Assembly, which officially opened today.

The agreement will initially run for a four-year term.

Under the partnership, they will share information on sports science and sports medicine as well as the construction of new facilities.

The AOC and COC will also establish a platform for the exchange of academic expertise in a bid to raise the sporting level of both countries.

“This agreement will help both Australian and Cuban athletes and coaches as they strive for success on the world’s greatest sporting stage, the Olympic Games,” Coates said.

“Australia has been at the forefront of the fight to eradicate the use of banned substances in sport and will be looking to further bolster this commitment with the Cuban Olympic Committee.”

As well as partnering for next year’s Olympics and Paralympics in the Brazilian city, the two National Olympic Committees will also work closely together in the build-up to Tokyo 2020.

Cuba enjoyed their most successful appearance at an Olympic Games when Sydney played host to the event in 2000, taking home a haul of 29 medals, including 11 golds.