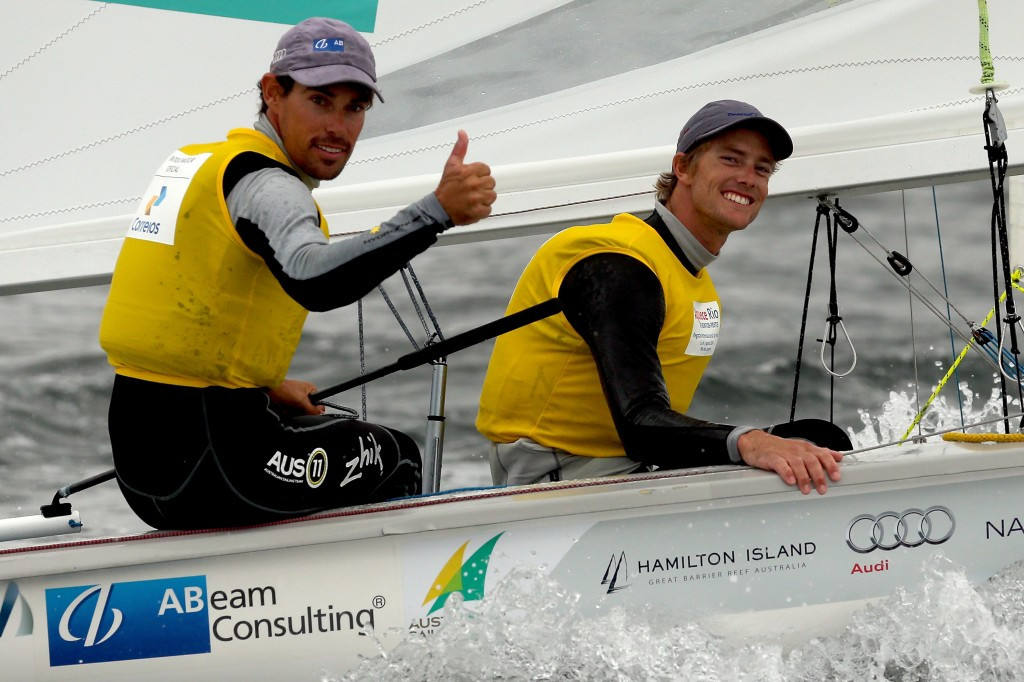 Shifting up to second place on 15 points are Croatia's Sime Fantela and Igor Marenic, who have finished on the podium at every 470 Worlds they have contested since 2009, with the exception of the 2013 edition.

That has relegated Great Britain’s Luke Patience and Elliot Willis to third in a four-way tie with Russia, Austria and Germany on 16 points apiece, while there is a three-way tie between Spain, the United States and Sweden from seventh down to ninth on 17 points each.

There were four different leaders across the races in each of the 470 yellow and blue fleets, with wins for Russia’s Pavel Sozykin and Denis Gribanov, and Spain’s Jordi Xammar and Joan Herp in the former, and New Zealand’s Paul Snow-Hansen and Daniel Willcox, and Argentina’s Lucas Calabrese and Juan De La Fuente in the latter.

"It was tricky light wind with big oscillations," said Marenic.

"Luckily we understood the first beat quite well and played okay with the shifts so were at the front of the fleet in both upwinds.

"After that it is easier when you are in front.

"Overall we are happy with our position and the day."

With the qualification series now complete, the 30 boat gold and 29 boat silver fleets are decided, while the countries in the hunt for World Championship podium places and Rio 2016 qualification slots are determined.

South Africa, Argentina, Finland, Germany, Israel, South Korea, Turkey and China are all vying for a spot at next year’s Olympic Games.

Defending world champions Lara Vadlau and Jola Ogar of Austria upped their game to score a two-one and accelerate to second overall, while Britain’s Hannah Mills and Saskia Clark maintained third place on the scoreboard.

London 2012 gold medallists Jo Aleh and Polly Powrie of New Zealand moved up to fourth, with Aleh describing the day as "rather tricky".

"We made things about as hard for ourselves as we could with some truly terrible first beats, but we held our composure and had some great catch ups," she added.

"We ended up with a 10th and a fifth, not a great day, but from where we were half-way up the first leg each time it still felt pretty good to finish with those two results."

A superb display from Tsuf Zamet and Stav Brokman gave them the first race win of the day, in complete contrast to the rest of their high scoreline.

Finland's Niki Blässar and Mikaela Wulff marched up the leaderboard, moving up to 16th overall from an overnight 31st placing as they also attempt to lay claim to Rio 2016 qualification.