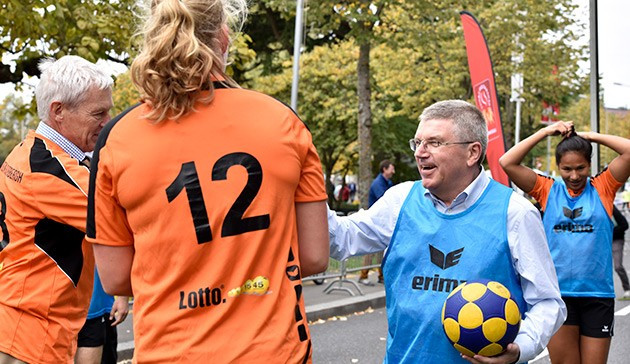 International Olympic Committee (IOC) President Thomas Bach joined youngsters from Lausanne and other Swiss regions in participating in a range of activities to mark Olympic Week.

The initiative, established by the Olympic Museum based in the Swiss city, offers 40 free sporting and cultural activities to eight to 15-year-olds and their families.

The event is now in its 35th year and the 2014 edition reportedly attracted around 6,500 participants.

Bach took part in a range of sports, including basketball and korfball, and he also interacted with members of the public during his appearance.

Several of the sports on the Summer Olympic programme will be exhibited during the week, such as archery, athletics, badminton, basketball, boxing, fencing, gymnastics, golf, handball, judo, rowing, table tennis, taekwondo, tennis and weightlifting.

Participants can also take part in biathlon and bobsleigh, two sports on the Winter Olympic programme, as well as billiards, climbing, orienteering and roller sports, which are all recognised by the IOC.

Attendees will also get the chance to try out non-recognised sports such as broomball, cheerleading, diabolo, American football, Nordic walking, inline hockey and slackline, similar to rope walking.

These activities will all continue throughout Olympic Week, which is due to conclude on Thursday (October 15).

Those who attend the event in Lausanne, considered the worldwide capital of the Olympic Movement, will also get the chance to meet an athlete and get involved in sessions outside of sport, such as road prevention and a Get Active! Interactive exhibition aimed at increasing the amount of exercise young people do.

Since the opening of the Olympic Museum in 1993, Olympic Week has grown each year and now offers a host of sporting activities to young people free of charge.

It was originally purely a presentation of Lausanne’s various sports clubs when it was first set up in 1980.