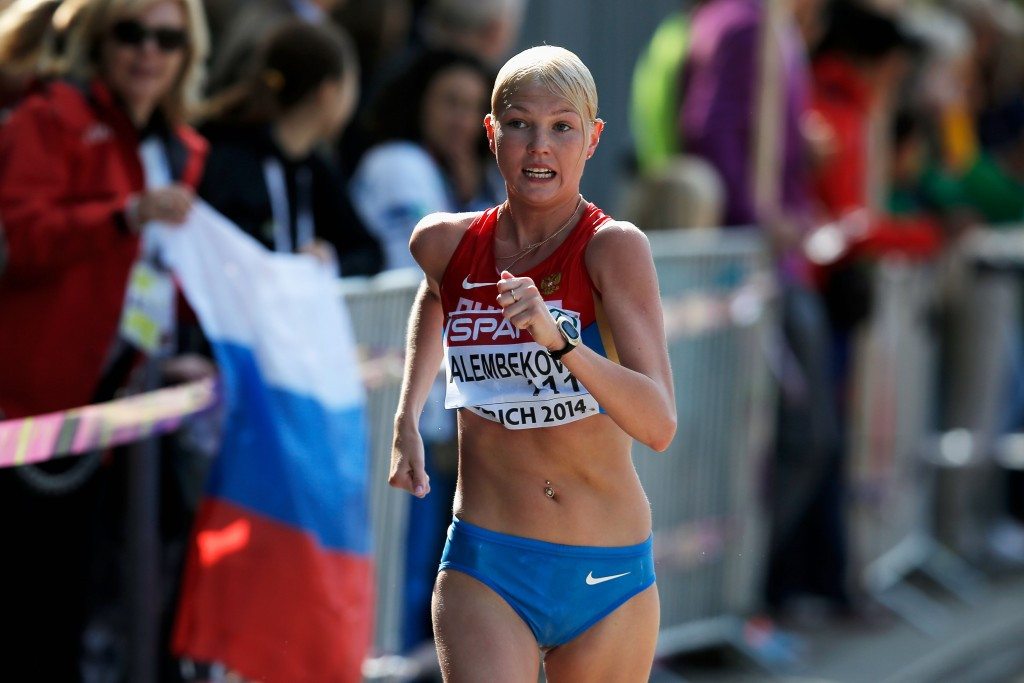 Reigning European champion Elmira Alembekova is among six more Russian race-walkers to have been suspended for failing doping tests, the International Association of Athletics Federations (IAAF) has revealed, meaning virtually all members of the country's notorious national squad have now been implemented.

Alembekova, a two-time European Cup champion who won gold in the European 20 kilometres race in Zurich in 2014. heads the sextet along with Mikhai Rhyzhov, a 50km silver medallist at the 2013 World Championships.

Another on the list is Stanislav Emelyanov, the original winner of the 2010 European title before being stripped of that gold last year, who now faces an even lengthier ban if confirmed as being guilty of a second offence.

All six tested positive during out of competition tests in June in Saransk, the base for a training facility headed by disgraced coach Viktor Chegin, who is currently under investigation by both the IAAF and the Russian Athletic Federation.

In a statement sent today to insidethegames, the IAAF “confirmed that all six athletes have been charged with a doping offence by the IAAF in July as a result of out-of-competition tests conducted by the IAAF in Saransk in June 2015."

It added: "All athletes have been provisionally suspended accordingly, the cases have been referred to the Russian Athletic Federation for adjudication in accordance with IAAF Rules.

"The IAAF will not make further comments on these cases until they are concluded.”

There consequently appears no immediate chance of Alembekova being stripped of her continental title, but if she ultimately is, Ukrainian silver medallist Lyudmyla Olyanovska would be expected to be promoted to gold.

Czech Republic's Anazka Drahotova would shift up to silver, while, because Sokolova placed fourth, Italy's Eleonara Anna Giorgi could move from fifth to third.

Others banned in January included Sergei Bakulin, the 2011 world 50km champion, and 2011 world silver medallist Vladimir Kanaykin, who has now been banned for life.

As these investigations continued, only one Russian race-walker was entered for last month's World Championships in Beijing, with the lone entrant, Alexander Yargunkin, ultimately not competing because of a positive doping test for erythropoietin (EPO).

Confirmation that six more had failed tests therefore comes as no surprise, with other walkers including Australian Jared Tallent having called for a "blanket ban" on Russian participants.

Regardless of whether such a ban is ever introduced, the team are now in disarray with less than a year to go until next year's Summer's Olympics in Rio de Janeiro.

The news also comes as a World Anti-Doping Agency Commission continues its investigation into allegations of "systematic doping" within Russian athletics.

Their full report is due later this year.