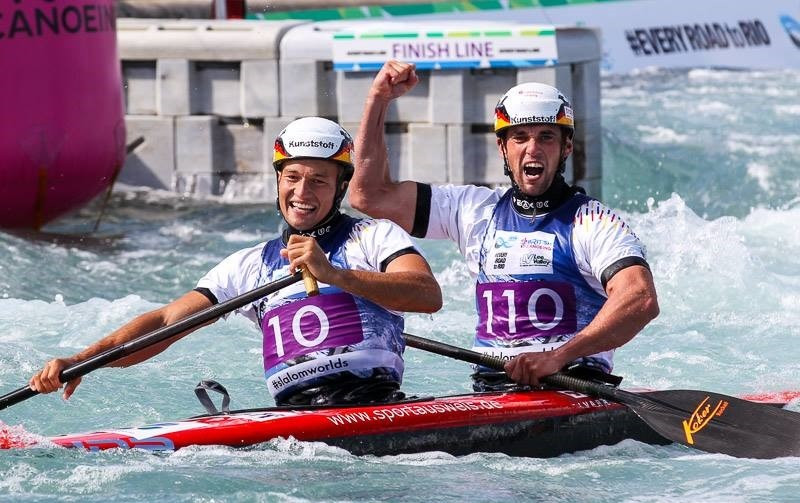 Germany’s Franz Anton and Jan Benzien secured their first C2 men’s world title after producing a blistering run in the final at the ICF Canoe Slalom World Championships here today, as they held off a field including world and Olympic champions.

The quality of the field was displayed in the morning’s semi-finals as Slovakia’s Hochschorner brothers Pavol and Peter were unable to keep their dream alive of a sixth title in the event after they could only manage the 12th fastest time, despite accruing no penalties.

Among the 10 qualifiers were Anton and Bezien after they finished fourth in the semi-final, but they produced a much faster run of 1min 39.17 seconds to top the leaderboard with several of the favourites still to race.

A two second penalty at the upstream gate 16 though had given the remaining contenders hope of beating the new target of 1:41.17 and the home fans were hopeful of success for Richard Hounslow and David Florence, after they had qualified fastest for the final.

However, it was not to be for the host nation after the pair picked up four penalties to end with a total time of 1:44.68 which would not prove enough to secure a podium position.

In the end it was the two French teams who got closest to the Germans as Pierre Picco and Hugo Biso produced a run of 1:42.25 to take the silver medal, while the world number ones Gauthier Klauss and Matthieu Peche are still chasing their first world title after finishing in 1:43.34.

With their superior strength in depth in the event France would later emerge as winners of the team event after their three crews, who all tackled the course simultaneously, produced a run of 1:55.78.

Peche though would not appear on the podium in either event after immediately flying home after news that his wife had gone into labour.

Germany were able to secure the silver medal in the event after finishing in a time of 2:02.34, while there was a first medal of the Championships for the hosts as Britain completed the course in 2:03.59.

In the women’s K1 event there was success for the Czech Republic’s Kateřina Kudějová as she delivered a fast but most importantly clean final round, whereas her rivals were picking up crucial penalties throughout the event.

The most critical of these was for the home favourite Kimberley Woods, who after producing excellent runs in both the heats and qualifying, was denied a silver medal after receiving a 50 second penalty, for missing a gate, to end last in the 10-woman final in 2:35.22.

Kudějová had no such problems as the former world under-23 champion secured her maiden individual world title at senior level by finishing in a time of 1:43.62.

"I am sick so I was already happy to be in the final, even more now, it’s awesome," she said afterwards.

"It’s a difficult course but this is how I like them so I was quite happy when I saw it.

“I was confident going into the final, I was a bit cautious of gate 5 but I did not make any mistakes, it was perfect."

The Czech athlete finished two seconds clear of Richarda Funk, who secured the silver ahead of her team-mate Melanie Pfeifer, who completed the podium in 1:46.33.

Kudějová would also step up to the top of the podium after the Czech Republic claimed gold in the team event in 2:27.33, while Britain and Russia completed the podium with times of 2:28.06 and 2:36.79 respectively.